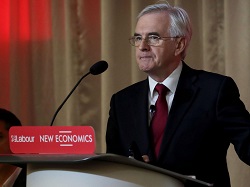 Labour has set up a “working group” to investigate the radical idea of a basic income and will report back on its conclusions before the next general election, John McDonnell has said.

In an exclusive interview with The Independent the Shadow Chancellor appeared to signal his desire to bring basic income in the party’s manifesto. The concept involves overhauling the welfare state and ditching means-tested benefits in favour of unconditional flat-rate payments to all citizens.

During the summer of 2016 Mr McDonnell, who has been the MP for Hayes and Harlington since 1997, suggested he could “win the argument” on basic income within the Labour party but now he intends to publish a report on the idea with Guy Standing, one of his economic advisers and a founding member of Basic Income Earth Network -; established in 1986 to encourage discussion on the topic around Europe.

Speaking about the idea -; floated by Benoit Hamon during the socialist primaries of the French presidential elections -; Mr McDonnell added: “Interestingly, [Narendra] Modi’s government has brought forward a report in India as well about the need to develop basic income ideas and again see how they can implement it over a period of time. All of a sudden it’s become an idea whose time may well have come.

“We’ve set up a working group,” he added. “Jonathan Reynolds in my team is now leading on that. We’re working with Guy Standing, one of our economic advisers. What we’re going to do with that again is bring forward a publication and then tour around the country and have discussions with people around that. It’s interesting -; the winds have sort of taken in the sails of basic income at that moment.

Asked whether he thought it was still a credible idea, he replied: “We’re exploring it. We think there are elements of it that we can bring forward as first steps towards a basic income that people can support”.

“I was involved in the early campaigns many years ago on the development of child benefit -; at that point in time there were all sorts of anxieties about whether you could bring forward a benefit for everybody that wasn’t based upon an assessment of need and we won the argument. I think child benefit is like one of the foundation stones of a future basic income.

His comments come before he appeared alongside his long-time comrade Mr Corbyn in Liverpool on Saturday to launch a series of regional economic conferences, aimed at addressing the regional investment imbalance in the economy. “It’s pretty stark what’s been happening over a period of years especially under this Government, is the lack of investment particularly in the North,” Mr McDonnell added. He’s anxious over what he describes as a potential “bankers’ Brexit” -; a deal at the expense of the wider economy for a special settlement to be done with the City of London.

He also vowed to deliver a “Crossrail for the North” with a series of major upgrades to east-west transport links. A new “High Speed 3” rail link would transform the economy of northern England, creating 850,000 additional jobs by 2050.