Press Release: Hayes and Harlington MP John McDonnell Turns up and Votes to Save Lives at Crucial Commons Debate 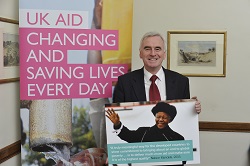 Local Hayes and Harlington MP John McDonnell voted in favor of a bill that would enshrine in law the UK’s commitment to spend 0.7% of national spend on overseas aid. By voting for this bill, which was included in all three party manifestos in 2010, they along with other MPs, have helped to fulfil the government and the country’s pledge to care for the world’s poorest and confirm this in law.

In the run up to the vote, many of John McDonnell’s constituents called on him encouraging him to turn up, vote and save lives.

John McDonnell MP says, “I am proud to represent Hayes and Harlington and always make it a priority to listen to people from my local area, whether it’s on a local or a global issue. After hearing from local residents, I wanted to fulfil our commitment to meeting our UK Aid promise and enshrine it in law. We have a duty to care for the world’s poorest and it is also in our interest to help build a more peaceful and stable world. We should be doing more and I do not believe the bill has gone far enough”

Since 1990 the number of children dying unnecessary deaths has been cut almost in half, from 12 million a year to 6.9 million. Aid has also contributed to improving education, health, sanitation, gender equality, and other public services that sustain a developing economy and add to global growth.

Ben Jackson, CEO of Bond, the membership organisation for 420 UK relief and development charities said, “On behalf of our members we are delighted today to see so many MPs including John McDonnell attend this important debate and vote in favour of this legislation. We are grateful for his support in upholding Britain’s promise of spending 0.7% of our national budget on overseas aid.”