John McDonnell hosted a Regional economic Conference at The Grand Harbour Hotel, West Quay Road, Southampton on Saturday 3rd March 2018 as part of a series of public economics conferences Labour’s Shadow Treasury team are holding around Britain over the next year. The conference was well attended with speakers and participants braving the extreme weather conditions to make it a very successful event.

His speech can be viewed here.

Cat Hobbs is the founder and director of We Own It, which launched in the UK in 2013. We Own It is a voice for everyone who wants public services that work for people not profit. It’s an independent organisation which campaigns against privatisation and makes the case for public ownership. Her presentation can be viewed here. 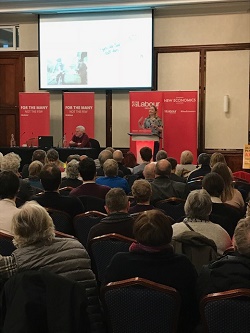 Below is a summary of the workshops with links to the various presentations.

The Labour Party is committed to creating an innovation nation with the highest proportion of high-skilled jobs in the Organisation for Economic Co-operation and Development (OECD) by 2030. This workshop will discuss how this can be implemented when we are in Government.

Polly Robbins spoke about the growing co-operative movement in the British digital sector. She argued that co-operative structures represent a viable and genuine way to harness social changes presented by the Fourth Industrial Revolution, to create a tech industry that works for society and for its workers.  Presentation can be viewed here.

Graham Turner spoke about how The Fourth Industrial Revolution started in the late-1990s, and the pace of change is accelerating. How the winners and losers will be dispersed unevenly. And how Governments have a critical role in harnessing the benefits of new technology.  Presentation can be viewed here 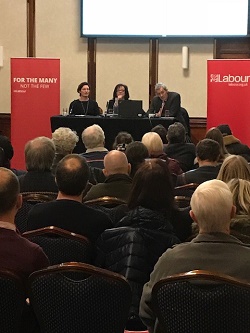 The session was chaired by Lyn Brown MP

Our economy is suffering from years of neglect by governments that have refused to support our industries, businesses and workers. This wasted potential is holding us all back. Inequality has ballooned as the economy has shifted towards low-paid, insecure jobs. Britain can only be stronger if every region is given the resources and support to succeed. This workshop will discuss how this can be implemented when we are in Government and how we can re-balance the economy. 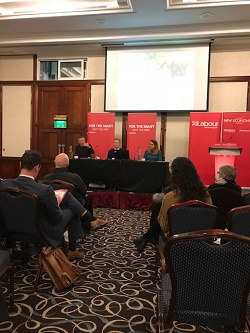 The session was chaired by Matt Rodda MP

Breakout 3: A Fair approach to Tax and Public Spending

Taxation is what underpins our shared prosperity. All of us, including business, benefit from a healthy, educated and skilled population, with access to basic services and secure housing. This workshop will discuss how this can be implemented when we are in Government.

Robert Palmer talked about our broken tax system. Why is it that wealthy individuals and companies get away with not paying their fair share? How do we create a tax system that brings in the money we need to fund public services? Presentation can be viewed here 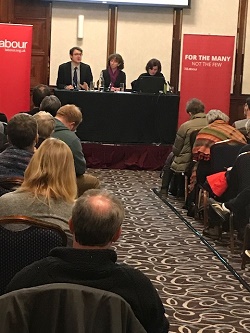 The session was chaired by Anneliese Dodds MP

In government, Labour would give more people a stake – and a say – in our economy by doubling the size of the co-operative sector and introducing a “right to own”. We will act to ‘insource’ our public and local council services as preferred providers. And we have committed to bringing key sectors including energy and water into democratic public ownership. This workshop will discuss how this can be implemented when we are in Government.

Kate Bayliss spoke about the problems with private ownership of water companies in England. She showed how investment in the sector has been largely financed by debt while almost all profit has been paid out in dividends to shareholders, mostly based offshore. Meanwhile, many households struggle to pay their water bills. Presentation can be viewed here

Anna Birley: talked about democratic public ownership from a co-operative point of view, looking at opportunities like employee and consumer ownership and voice and new models for water, energy and rail. 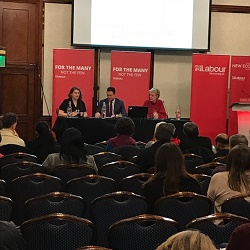 The session was chaired by Stephen Morgan MP

Breakout 5: The Transition to a Green Economy

Building a clean economy of the future is the most important thing we must do for our children, our grandchildren and future generations. Yet recent years have seen a failure to progress towards our targets. A Labour government will put us back on track to meet the targets in the Climate Change Act and the Paris Agreement. This workshop will discuss how this can be implemented when we are in Government.

Sara Mahmoud: spoke about what a transition to a greener economy means for workers and communities. Drawing on research conducted in East Anglia, she highlighted the challenges for places where ‘dirty’ industries often offer the better jobs in the area. For transition to be possible, environmental policy can’t be thought of as separate to questions of ownership, finance, skills and industrial strategy. It is also crucial that people on the ground lead the way, with the Lucas Plan providing an inspiring story for how a revitalised labour movement can support this. Presentation can be viewed here

Leo Murray: spoke about the way in which technological change means Britain’s broken energy system is now undergoing rapid transformation, offering an unprecedented opportunity to restructure the way we meet society’s energy needs around a model that is predicated on collective agency and cooperation rather than competition. Decentralised renewables can empower us to collectively repatriate value from the energy supply chain back into our communities, rewarding local people for hosting the new energy infrastructure we need to thrive in the 21st century. Presentation can be viewed here 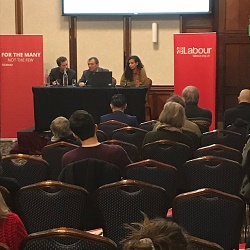 The session was chaired by Alan Whitehead MP

Labour accepts the referendum result and wants to bring the nation together during the Brexit process and afterwards. We will prioritise jobs and living standards, build a close new relationship with the EU, protect workers’ rights and environmental standards, provide certainty to EU nationals and give a meaningful role to Parliament throughout negotiations. This workshop will discuss how the South East will be affected after Brexit.

Ross McNally: talked about how Business are enterprising by nature.  Businesses are expressing an expansionist mood and look to grow both through and after Brexit. However, businesses need backing in skills, infrastructure and support to achieve growth in trade and provide employment. With a focus on this, plus accessible finance, businesses will do the rest. Backing them will help to create good jobs and prosperous communities. Presentation can be viewed here

Jennie Formby: outlined a number of the potential very negative impacts of Brexit but with the conclusion that this is why Labour policy on Brexit with the six tests and Jeremy’s speech last week was so important, together with Labour’s industrial policy to grow our manufacturing base and the whole economy. 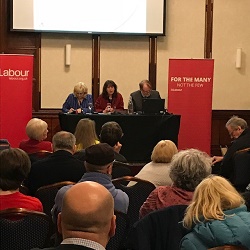 The session was chaired by Cllr Nancy Platts