John is holding a public meeting this evening with PCS workers who are on strike. John said “it is disgraceful the way these dedicated staff are being treated. Their jobs are being threatened, the union reps are being victimised and our art collections are being put at risk.” 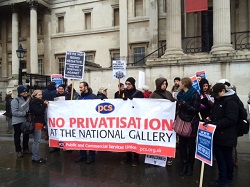 Gallery bosses announced plans to privatise almost all staff, including those who look after the paintings and help the gallery’s 6 million annual visitors. They have also reneged on a promise to introduce the London Living Wage, meaning the institution is the only major museum or gallery in the capital that does not pay it.

Private security firm CIS has taken over the whole of the Sainsbury wing for the rest of this year without any competitive tender or consultation.

John is calling on all artists and those interested in the arts to come together to support PCS trade unionists involved in this dispute.

John has written to the trustee urging them to think again.