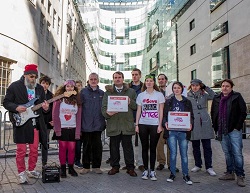 John McDonnell MP joined campaigners who have been fighting to save the popular youth-orientated BBC Three television channel. After gathering outside BBC Broadcasting House, the delegation of petitioners walked to the BBC trust were the John McDonnell MP and Jono Read from Norfolk, who has been leading the campaign, delivered a petition against the closure of BBC Three to the BBC trust.

The petition, which has amassed well over 271,000 signatures, was started on Change.org in March last year after BBC Director Tony Hall announced plans for the closure of BBC Three as a broadcast channel and for it to operate solely online.

A week later John tabled an Early Day Motion 1160 supported by MP’s from across the House expressing concerns over job losses and the need to ensure that quality diverse public service broadcasting can continue to flourish.

John said “I fully support the campaign to save BBC Three. I urge the BBC management to reconsider their proposal to close a television channel for the first time in the history of the institution.

This morning I invited representatives of the BBC Trust to Parliament to present the findings of the consultation over BBC three proposals to MPs.

BBC Three has consistently given birth to popular, innovative content and its closure would be a loss to our diverse, high quality public service broadcasting in this country.”

The plans, which aim to save £50m a year, are subject to the approval of the BBC Trust. The Trust ran a public consultation on the proposals which ended yesterday (Feb 17)