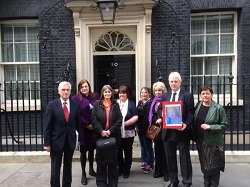 John McDonnell hosted a meeting in the House of Commons in support of Edna’s Law to protect whistle-blowers representing all sectors including prison, social services finance, NHS and social care. He then joined them in delivering the petition below to number 10 which included damning evidence from more than three thousand whistle-blowers.

To: The Prime Minister.

Action is needed now to Protect the Protectors

We the undersigned represent whistle-blowers from all sectors, including social care, construction, finance, prisons, education, social work, transport and NHS.

ONE law to protect ALL whistle-blowers in ALL sectors – Edna’s Law.

In many cases, eg Baby Peter’s death, whistle-blowers did raise concerns but were victimised while wrongdoers and those who victimised them stayed in senior jobs. We ask for the following action:

That those responsible for wrongdoing or concealing wrongdoing are held to account now because there can be no justice whilst such injustice stands.

That all those genuine whistle-blowers who have been failed by the system and by the Public Interest Disclosure Act be given full redress.

Without accountability nothing can change and many people in senior positions who have ignored whistle-blowers and covered up serious wrongdoing, some criminal, still continue working and causing further harm. You cannot build on an unjust and rotten system and to try to do so is to condone the past wrongdoing.

We note your intention on mandatory reporting on child abuse which intends to jail those who fail to report abuse, whilst the law completely fails those who whistle-blow and suffer the consequences for reporting.

Therefore we ask that PIDA be scrapped and replaced by Edna’s Law which will protect the protectors of the public and will hold to account those who are truly culpable for failures and wrongdoing.

We have already made three direct appeals to Parliament and we draw your attention to our evidence listed overleaf, which has not been acted on by Sir Robert Francis, The BIS, Health or Justice Departments.