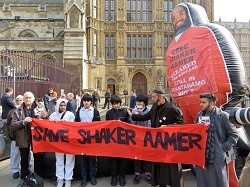 John McDonnell led the Shaker Aamer debate in Parliament on 17th March which resolved unanimously to call upon US government to release him from his imprisonment in Guantnamo Bay and allow him to return to his family in UK.

John McDonnell who convenes an all-party group set up to coordinate the Parliamentary campaign for the immediate return ofShaker Aamer, an aid worker imprisoned 13 years ago, to his British wife and four children in London has said:

“It is absolutely unacceptable that an innocent man continues to be to be subjected to inhumane and degrading treatment in absolute denial of his human rights remains in Guantanamo.

The continued incarceration of Shaker Aamer on US territory, without charge and against who unspeakable atrocities have been committed shames both our Governments and is an international outrage”

Shaker Aamer, the last British resident in Guantanamo, is soon to begin his 14th year of imprisonment without charge or trial and having been cleared for release under two separate US administrations.

“I thank the Backbench Business Committee for allocating time for this critical debate at an important time in the campaign to secure the release of Shaker Aamer. By way of introduction, I pay tribute to all those who have campaigned so hard over many years to bring Shaker Aamer’s case to our attention. I pay tribute to the “Save Shaker Aamer” campaign, and all those campaigners who have stood in Parliament square month after month protesting in their orange boiler suits with their placards until someone began to listen to them. I pay tribute to the “We Stand with Shaker” campaign, to Shaker’s family who have joined us today and to the organisations Reprieve and Amnesty International. I pay tribute, too, to the full range of newspapers that have supported this campaign. They range right across the political spectrum of journalism from the Daily Mail and The Daily Telegraph to The Guardian and the Morning Star. In addition, I pay tribute to all the celebrities, actors, artists and sportspeople who have got behind this campaign. Finally, I thank the many hon. Members from all sides of the House who joined the all-party parliamentary group, which now has more than 40 members drawn from all political parties.”