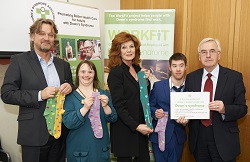 John McDonnell attended the Launch of Down’s syndrome Awareness Week, which was supported by the Down’s Syndrome Association on 17th March. The campaign which encourages and supports people with Down’s syndrome to take part in activities they enjoy in their local community. It also identifies and advises on barriers to inclusion.

During the event MPs heard from young people with Down’s syndrome about how important it is for them to be actively involved in their local community. The event was also attended by celebrity supporters of the Down’s Syndrome Association including Rula Lenska, Joanna David and Simon Shepherd.

The Down’s Syndrome Association supported WORLD DOWN SYNDROME DAY on 21 March by inviting their 20,000 supporters to wear special, limited edition LOTS OF SOCKS. People across the UK wore the socksat home, nursery, school, university, work, on holiday may be on 21 March 2015 to celebrate together and raise money for the charity.

John said “I fully support this campaign and urge everyone to get behind it too. It is extremely important that people with Down’s syndrome benefit from all the opportunities and activities available in our communities.”