Dogs Trust, the UK’s largest dog welfare charity highlighted the UK’s growing puppy smuggling problem to MPs at its annual House of Commons reception on 1st December, which was hosted by Sir Roger Gale MP and supported by the players of People’s Postcode Lottery 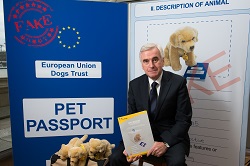 John said “I am pleased to support Dogs Trust in raising awareness of the issue of illegal puppy smuggling – something which affects many people in my constituency each year. Not only is this issue affecting unwitting members of the public who are buying puppies without knowing where in the world they have come from, but it also brings with it a risk of disease to humans and dogs, which is simply unacceptable. There are also the huge welfare concerns for the puppies being transported such long distances at such a young age. It’s evident that greater measures need to be put in place to deter people from smuggling puppies into this country illegally.”

Adrian Burder, Dogs Trust CEO, said “as we approach the festive period, I would like to remind anyone thinking of getting a dog to do their research and ensure they know where their dog is coming from before making the decision to bring a four legged friend into their home. Dog lovers could inadvertently be lining the pockets of unscrupulous breeders and fuelling the illegal puppy smuggling trade.

“Dogs Trust would like to see far more being done to ensure that proper checks at ports are enforced, that on the spot fines are handed out to those individuals smuggling puppies illegally to act as a deterrent and that a nationwide multi-agency strategy is put in place to deal with this issue once and for all.”