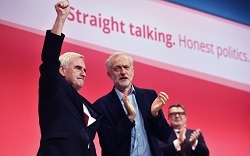 It was inevitable and understandable that the election of Jeremy Corbyn would be a massive culture shock for some sections of the party, especially some members of the parliamentary Labour party.

For the first time a leader had been elected directly, by party members and supporters, who was not part of a small circle of Labour’s frontbench.

The new leader was also elected with an overwhelming mandate on a political programme that seeks to take the party in a direction that reflects the current views of party members. This platform explicitly seeks to transform the party from the traditional centralised party into something more akin to a mass social movement, responding to the rising demand for greater activist engagement.

People who were comfortable with the old ways of working in the party saw everything they thought permanent suddenly at risk of change, not sure what was to replace the old methods. A venture and career path they had given their lives over to they saw being placed in jeopardy.

Of course, people get anxious in these situations and can feel threatened. Who wouldn’t? Nevertheless the majorities in every section of the party, including the parliamentary party, are embracing this new energetic movement to update our party for the new century.

People realise that if Labour is to fulfil its founding goal of transforming our economic and political system into a more equal, free and truly democratic society, which provides security and life-changing opportunities to the British people, then there is no going back.

Interestingly, more often than not it is Labour MPs who are emphasising that our members don’t want simply to be cogs in an electoral machine, delivering the leaflets and knocking on the doors, yet without being the effective determiners of the direction of the party.

The challenge we all face in the party is how we move from the politics and organisational form of the old party ways to the new politics and keep everyone together. Of course, it’s tough. Some are worried about a degeneration into the old-style politics where disagreement is not tolerated, and the old-style, heavy-handed discipline, with threats of expulsion or deselection, being reeled out.

If Labour is to build itself as a mass movement capable of mobilising mass support to radically change our society, these old methods won’t just fail, they will set us back. We have to take people with us, within the party and within the overall electorate. That requires a long-term, creative, patient socialism. It also means not mistaking democracy for division or debate for dissent. Our new politics mustn’t be viewed through the eyes of the old politics.

Although there was a principled disagreement over the bombing of Syria, the ability of Labour MPs to exercise a free vote based on conscience set a new moral standard in our politics and Labour members should be proud of that. No other political party had the courage to follow Labour’s example.

The media has seized on the lobbying tactics of some who clearly haven’t got it yet about our new politics. There is no place in political life for threats or abuse and we will not tolerate them. At the same time those that want to make mischief by misreporting or misrepresenting organisations and events do us no favours either.

Labour has demonstrated in the last few weeks how extremely effective an opposition it is becoming. We led the campaign to force George Osborne to reverse the cuts to tax credits and the police. We have shown how a party can respect principled differences and hold together and we have won a difficult byelection with a tremendous result. And now Jeremy Corbyn’s leadership has been strengthened.

The message is clear: unite around the principles of the new politics and we can be the most powerful force for progressive political change in generations.