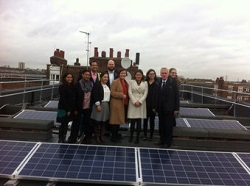 The decision by this Government to cut subsidies for Britain’s flourishing renewables industry was one of its stranger decisions. So much for George Osborne’s “long-term economic plan”. A promising new industry has been torn apart, with 5,000 job losses already, five firms closed down – and 27,000 jobs threatened.

Environmentalists and business groups are on the same side in condemning the move. New, young industries need help to establish themselves and stand on their own two feet. Instead, this government has kicked away the support – and made tackling climate change all the harder.

The sheer short-sightedness of the subsidy cut was made clear today when I visited Banister House with Lisa Nandy, our shadow secretary of state for energy and climate change. It’s the first community-owned rooftop solar energy project in Hackney, and the largest in London.

With the help of Repowering London, they have installed over 400 solar panels on the roof of 14 housing blocks on the estate, after raising £150,000 via a community share offer. The impressive solar array is expected to save approximately 679 tonnes of carbon dioxide over the next twenty years by replacing electricity that would otherwise be generated by coal and gas power stations.

The project has provided skilled jobs to those who installed the solar panels, and they continue to take on young apprentices.

However, because of the government’s cuts to “feed-in-tariff” (FIT) subsidies, energy projects like Banister House are under threat. The swingeing 87% cut to funding the FIT scheme is decimating our rooftop solar industry. The government’s own estimates suggest that future installations will fall by over 90%. That’s one million fewer solar schemes being installed by 2020.

Slashing the FIT scheme now means it will well over a decade for most household solar panels to pay for themselves. In practice, that means most families, schools, council tenants and community groups will be forced out of the solar revolution. We’ll be trailing behind the rest of the world, and needlessly threatening jobs that will be vital in the low-carbon economy of the future.

It’s hard to fathom the logic here. David Cameron had some fine words in Paris about tackling climate change. George Osborne has pledged support for new industries. It’s a false economy to make cuts now that will cost us so dearly in the future.

Businesses in their infancy and operating in high-potential areas should be the priority. If we don’t support them we’ll be losing out on what Barclays has called a $30trillion global investment blitz from fast-growing green industries. We should be shaping the economy of the future – thinking about where the opportunities are, and taking on the challenge of climate change.

Successful economies today have governments prepared to take a strategic approach to how development takes place. The old idea that simply exposing new industries to the full blast of competition will promote their development is increasingly discredited. Economists from Dani Rodrik to Ha Joon Chang to Marianna Mazzucato have shown how intelligent support by Government can nurture new technologies and create the space in which new industries can flourish.

But the Tories are stuck in the past, and ducking the challenge. In November, the UK became the only G7 country to increase fossil fuel subsidies. We are paying out £6billion a year, almost twice the financial support we provide renewable energy providers – which we are now continuing to cut.

After the deal struck in Paris over the weekend, the shift to a low-carbon economy is inevitable. The government should be supporting this transition, not hampering it.