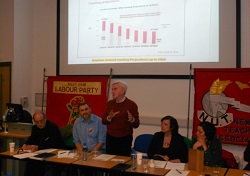 All have publicly backed Newham United Against Austerity. a co-ordinated challenge opposing austerity measures and further public spending cuts by the Conservative government.

Mr McDonnell said: “Austerity is not an economic necessity, it’s a political choice.

“We can afford these services. We are still the sixth richest country in the world.”

The Labour MP called for the “mobilisation of our communities” to come together in fighting austerity and went on to criticise the current government for bailing out the banks as well as privatising prisons and the education system.

He spoke to an audience of just under 100 people at the Stratford campus of University of East London this afternoon.

Kevin Courtney, deputy general secretary of the national union of teachers, said Newham schools were facing budget cuts of 17 per cent over the next five years and said “we can’t let it happen”.

He said: “We are all in it together and if we are not in it together then we have no chance,” telling audience members that the NUT did not usually work with other organisations but they had been left with no other choice.

Other speakers included Rokhasana Fiaz, Newham councillor for Custom House, who spoke out against the growth of inequality and child poverty, and Yvone Green, Unison’s greater London region officer.

Attendees -; including teachers, Labour members, disability and housing campaigners and Newham councillors, were urged to forget their differences and unite together against the cuts.

The meeting was chaired by MP Lyn Brown and launched with the support of Newham Council and Newham Joint Trade Union Committee.

A second campaign meeting has been planned for March 5.