John McDonnell: these elections are a first step to winning in 2020 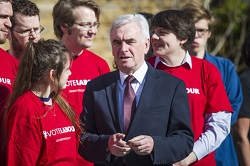 These elections have confounded the doomsayers. The Tories and their friends in the media arrogantly thought they had destroyed the Labour Party last May. However, we have proved them wrong.

As against many predictions to the contrary, we have held councils in key election battlegrounds like Southampton, Norwich, Harlow, Derby, West Lancashire, Nuneaton and Cannock Chase. And we have gained seats from the Tories in places like Birmingham and Daventry, and from others in Sunderland, Cambridge, and Newcastle.

In addition, we have retained power in Wales and seen off the Tories in all their targets seats, plus a win in Llanelli is another excellent result as it was Plaid Cymru’s top target seat.

Of course things didn’t go the way we wanted everywhere. In Scotland we’re obviously disappointed with the result, although just a year after Labour lost all but one of our MPs, no-one thought that this was an election where the test for Labour was whether we increased our number of MSPs.

Yet there was still some good news to build on as we won seats in East Lothian, Edinburgh Southern and Dunbarton.

But we must not forget that the Tories said we should judge Jeremy Corbyn in these elections on how well we do in London. And by that measure we have done incredibly well.

The Tories mistakenly believed that Jeremy would hurt Sadiq’s chances so they put them both together on all their leaflets, which backfired tremendously as it helped promote two of our strongest assets in London.

They also completely underestimated the success of Jeremy’s campaign last summer that has helped us to mobilise our activist base in London, helping us as a party to get out our vote on polling day.

On top of all this the Tories further got their tactics terribly wrong in London with a racist and divisive style of campaigning that we should never see repeated again by a major political party.

Nevertheless, now for only the second time ever we have a Labour London Mayor of London.

But we are not getting too carried away as we accept that the path back to power for Labour will be a long one. And we must all come together as a party and a movement to unite with those who equally want to evict the Tories from Downing Street.

That is why these elections are just the start of us laying down the foundations to win the elections that really matter in 2020.