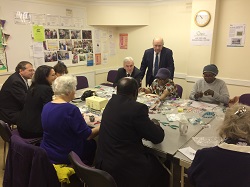 Labour is today giving a guarantee to pensioners and those approaching older age that we will guarantee their incomes regardless of the Tories’ shambolic handling of Brexit.

John McDonnell MP, the Shadow Chancellor, and Debbie Abrahams MP, the Shadow Work and Pensions Secretary, on a visit to Southwark Pensioners Centre, South London, have given a firm commitment to pensioners in Britain that the next Labour government will protect the triple-lock and pensioner benefits such as the TV license, bus passes and winter fuel allowance.

John McDonnell said “After six wasted years of Tory economic failure that has seen some have to wait longer to receive their pension, and those in work approaching retirement having to work longer with earnings stagnating, Labour won’t let them face further uncertainty or reductions income.

“The OBR and Bank of England are projecting inflation to rise in the years ahead and with the Tory government all over the place on Brexit, there is too much uncertainty for those on fixed incomes such as pensioners.

“Philip Hammond refuses to give this guarantee to our country’s elderly population, or stand up to Tory politicians calling for the triple-lock to be scrapped.

“Those older people who voted for Brexit did not vote to see their incomes threatened as a result. Labour is instead committed to protecting pensioner incomes in our country, and we will provide the certainty that this government refuses to whether it is on the state pensions or the crisis in our care service.

“It is only a Labour government that can make an economic success of Brexit, so that no one and no community is left behind.”

“This Government is abandoning older people. They are failing to protect existing Defined Benefit pension agreements, failing to guarantee the triple-lock and failing to act on the injustices placed upon WASPI women by their chaotic state pension age equalisation.”

“Labour has already committed to extending pension credit to provide support to hundreds of thousands of the most vulnerable WASPI women, now we are committing to guaranteeing the triple lock under our watch.

“When taken with our plans to defend the NHS, and end the Tory crisis of social care it is clear that only a Labour government will guarantee a dignified living standard for older people.”