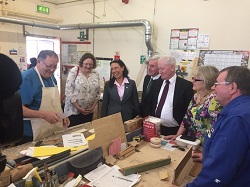 The Pensioner’s Pledge Card lays out Labour’s four promises to protect older people in our communities:

Alongside the pledge card, Labour will publish new analysis from the House of Commons Library showing pensioners will be at least £650 better off by the end of the next parliament from keeping the triple-lock.

Highlighting an increase in pensioner poverty over the last year, Labour will also commit to compensating women worst affected by the Government’s speeding-up of the state pension age; protecting pensioner benefits and protecting the pensions of UK citizens living abroad.

John said ” I am delighted to be launching this pledge card that will inform many elderly people in our communities that Labour is not only promising to stand up for pensioners; but is determined to ensure they keep the hard-won entitlements they currently hold.

It’s a national scandal that pensioner poverty is rising and the Tories are refusing to commit to keeping the triple-lock or compensate women worst affected by the speeding up in the state pension age.

Only a Labour Government will stand up for pensioners and protect them throughout the next parliament.”