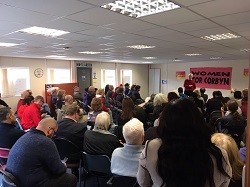 John McDonnell launched his election campaign at the Labour Hall in Pump Lane, Hayes on Saturday to a crowded audience. As well as local supporters, there were groups from across London who wanted to help John in the same way that he has supported them over the years.

Mick Cash General Secretary of the RMT gave a rousing talk about the labour movement and pointed out how the election will be won on the doorstep.

Mark Serwotka, General Secretary of PCU spoke passionately about the role of the welfare state – the NHS, education, benefits, housing local services and how Labour will get it right and stop privatisation.

Ali Milani, Vice President of the National union of students spoke about the real enthusiasm he has seen from students in that they now can see real opportunities and for the first time they believe they have a Labour Party they can fight for.

Selma James the co-author of The Power of Women and the Subversion of the Community, co-founder of the International Wages for Housework Campaign, and coordinator of the Global Women’s Strike spoke about the women’s movement and how a vote for John was a vote for us all.

All speakers expressed their gratitude for the support John had consistently given them throughout his time as an MP.

Helen Lowder, Chair of the CLP reminded us of how hard we have all worked over the years in campaign after campaign election. She also pointed out that talking to people on the doorstep about labour’s common sense policies would resonate with the people and win them over to vote labour and to get the message out with kindness and compassion.

John thanked everyone for their support and particularly, Helen who has done such an amazing job of running his constituency office. John talked about community socialism and how the Labour Party through policies for the 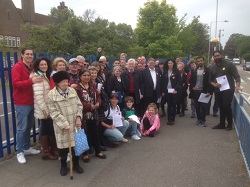 people would transform the nation into a fair and just society with wealth for everyone.

After some refreshments, a mass canvas took place in the Botwell ward. The response on the doorstep was supportive of the labour party and the work that John has done over the 20 years he has served his constituents both in the community and in Parliament.

It was a good day which lifted everybody’s spirits.