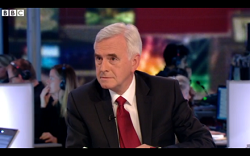 The chancellor has made clear this morning that the message remains the same -; austerity will continue. The Tories have learnt nothing from the general election, and the last seven wasted years of economic failure. The Conservatives have no understanding of the depth of suffering, stress and insecurity their long austerity regime has caused.

And we haveseen the chancellor againtrying to distance himself from the position of his prime minister on Brexit.It just shows furtherdisarray at the top ofgovernment. The fact that there is clearly such a serious split between Number 10 and 11 is very worrying and only helps to undermine our country ahead of the Brexit negotiations.

It further shows just how weak a position Theresa May is in. And raises the serious question of: how can she negotiate Brexit when her own chancellor is so publicly disputing her position on Brexit and briefing against his own cabinet colleagues?

The truth is that the government’s spin of over a “hard” or soft “Brexit”, is just a smokescreen to paper over the cracks of the divide at the very heart of this Tory government. The reality is that they are really planning a Brexit for the few by turning our county into a tax haven off the coast of Europe, which diminishes workplace rights and undermines working people’s living standards.

Labour has called from day one for the Chancellor to act on gaining assurances over our stake in the EIB [European Investment Bank], and it has taken him a year to raise a finger; and now he has, all he is offering businesses in our country in way of support to mitigate any risks from the loss of this resource is a drop in the ocean from the actual support they will really need.

Only a Labour government will secure a Brexit for the many that will put jobs and the economy first, and ensure that working families and small businesses are protected from any challenges our country faces after leaving the EU.