This is a brief summary of just some of my activities locally and in Parliament in the recent period.

I dropped into Charville Community Centre to give Kathleen a card and present and wish her a very happy birthday as she was surrounded by friends and family celebrating her 100th Birthday.

I visited St Mary’s fete and flower festival. It was beautiful.

I attended a very moving ceremony to say farewell to Headteacher Robert Lobatto and John Major, the Chair of Governors who I have worked with as they have so diligently served the school for many years.

I visited Guru Nanak School to speak with the Headteacher about the wonderful progress the school is making. 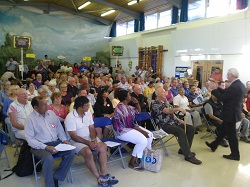 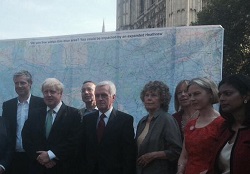 Over 200 Heathrow villagers packed out a public meeting at Heathrow Primary School last night I convened to discuss the renewed threat of a 3rd runway. At the ,meeting I explained the Davies recommendations and decision making process from here on. I announced that I have convened an all day national gathering at the school on 19th September as part of the campaign to highlight what would be lost if the 3rd runway goes ahead and how we can prevent this happening. I am writing to David Cameron to invite him to this conference to explain how his “No ifs, no buts, no third Runway.” promise fits in with the Davies commission. The residents at the meeting expressed their determination to continue the fight against the runway and to save their homes and villages. 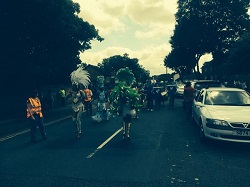 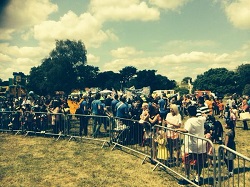 Hayes Carnival procession arrives at Barra Hall Park for our community festival. It never ceases to amaze me that it gets bigger & better every year. The vast range of community groups reflects the wonderful diversity of our community. A hugh thank you to all those who made it such a success.

I Visited Hayes Islamic Centre tonight to join my Muslim friends for Iftar, at end of day’s Ramadan fast. 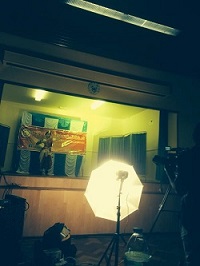 The 4th anniversary for the Tamil Community Centre 11th

I attended Helen Watson’s Leaving Ceremony to thank Helen for her hark work on behalf of our Community.

I spoke with children West Drayton Primary School’s Assembly about what it’s like to be an MP. They were as bright as buttons and asked some excellent questions.

I met with the developers of Southall Gasworks Site to discuss the implications for the park.

I supported hundreds of taxi drivers from across the country who lobbied parliament warning that deregulation of the industry could hit standards and lead to chaos on our roads. The unions are fearful that if the plans go ahead it could lead to “passengers being ripped-off and make it easier for criminals to pose as ‘rogue’ taxi drivers and increase the risk to passengers”.

Below is a list of the interventions I have made on the floor of the House of Commons this month. Please click the link below to take you to the debate set out in the Hansard.

Business of the House

Written Questions I have asked recorded by the date the answer was received.

To ask the Secretary of State for Communities and Local Government, if his Department will bring forward legislative proposals to introduce a statutory duty for the fire and rescue service to respond to a major flooding incident; and if he will make a statement.

The Civil Contingencies Act 2004 and the Fire and Rescue Services Act 2004 detail the roles and powers of fire and rescue authorities in respect of both emergency response and rescue in a wide range of situations, including from flooding. Fire and rescue authorities are expected to produce Integrated Risk Management Plans which identify the full range of risks that an authority’s service is expected to respond to and is subject to consultation. This approach is enshrined in the National Fire Framework which was given statutory effect in August 2012.

To ask the Secretary of State for the Home Department, if she will (a) publish a new drug strategy and (b) consult drug treatment providers in the preparation of such a strategy; and if she will make a statement.

We will continue to build on the Drug Strategy launched in 2010 and tackle drugs as a key driver of crime. This balances three key themes to reduce the demand for drugs, restrict the supply and support individuals to recover from their dependence.

There are positive signs that this approach is working: there has been a long term downward trend in drug use over the last decade, the number of heroin and crack cocaine users in England continues to decline, and more people are recovering from their dependency now than in 2009/10.

We continue to work with external partners including treatment providers and the Government’s independent experts, the Advisory Council on the Misuse of Drugs, in developing new policy.