In this first newsletter since the election of our new leader Jeremy Corbyn I would like to say to the new members of the Party, or those who have joined in as registered supporters, or affiliated supporters, welcome, welcome to our Party, welcome to our movement. And I say to those returning to the Party, who were in before and felt disillusioned and went away, welcome back. What we have seen in this country is an exercise of people power and I would like to say a huge thank you to thousands who have given us such amazing support.

Below is a brief summary of just some of my activities locally and in Parliament in the recent period. 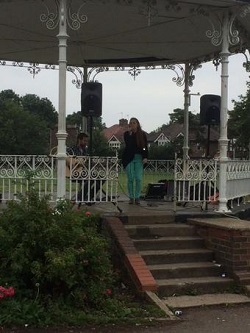 Barra Hall Park was one again host to a season of activities for all the family with activities for younger children facilitated by Hillingdon Play Association and Storytelling with Hillingdon Library Services, Mrs Bubbles and Magic Sam. Productions including, Persuasion, Robin Hood and interactive theatre workshops took place in the Open air theatre. Performances from The Blues Brothers tribute band, Decoy Jet, Jo Lee and Neon Lights Acoustic Band, Jo Lee Neon Lights pictured below took place in the band stand. This was the last Sunday concert, a great end to a wonderful summer season in the park.

I attended the first stage of the public inquiry into the use of the M4 hard shoulder for traffic, which will bring the noise and pollution of traffic nearer to people’s homes. There will be a public consultation meeting in the area at a later date, which I will be attending to express my concerns.

I attended a meeting at Rosedale Park, with the Bowling Club, of which I am patron, to discuss funding for improving and making safe the public paths surrounding the bowling green and many other improvements to the park. I am pleased to report that following a meeting I arranged with Hillingdon Community Trust we have secured a grant to fund this work.

I was delighted to meet with pupils from Laurel Lane School after they completed their tour of the Palace of Westminster and will follow this up with a meeting to the school. 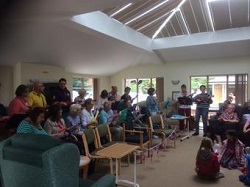 The Friends of Harlington Hospice garden fete was an outstanding success and a really fun afternoon culminating in the local ukelele band and choir performance.

Over 1000 people enjoyed the Fun Fair, dog show, pony rides, family games and music. Below is a picture of me drawing the raffle. A huge amount of raffle gifts were donated by local companies.

Following the overwhelming result of the leadership election, I hosted an all members meeting outlining the need for us all to work together in this coming period as our community faces cuts and our services are under threat. We need to look at our priorities and at how we rebuild the party both locally and nationally. We have doubled and nearly tripled our membership since Jeremy Corbyn commenced his campaign. 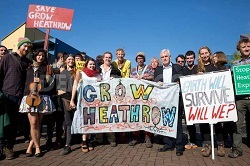 I handed a statement in at Uxbridge County Court in support for the anti-third runway occupation, which read “Members of Grow Heathrow have become part of the local community, making a valuable contribution to the life of the local villages. Grow Heathrow is part of a fierce community resistance to Heathrow’s expansion that won’t go away easily for any government. I commend this group to you and hope that its members will be able to continue to remain on this site and part of our community.

I attended the open house in Harmondsworth Village and met with local residents.Highlights included stands from the NFU (National Farming Union), Womens Institute, London Borough of Hillingdon, Refreshments & Live music, culminating in a live display showing how a Womens Land Army unit may have utilised Horses during WW2. I joined Philip Sherwood, our local historian, at his seminar on the history of Heathrow. 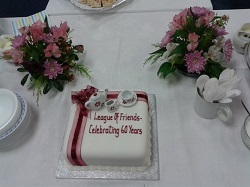 I was honoured to be asked to cut the cake as The Friends of Hillingdon Hospital celebrated 60 years of providing funds for much needed equipment for the Hospital. They donate approximately £40,000 per annum.  These funds are raised solely from two shops at the Hospital, the Tea Bar in the Main Outpatients and the Baby Boutique in the Maternity section.  These two shops are run entirely by Volunteers who are so very much appreciated for their hard work over the years. 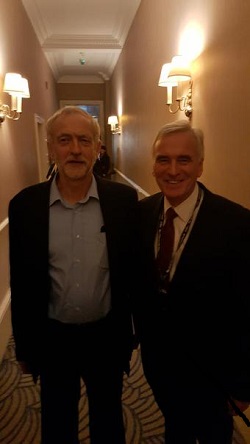 Huge Victory. 59% of members, affiliates and supporters voted for Jeremy Corbyn to become the leader of our Party. It was a magnificent campaign and thank you to the thousands of people who have given us such amazing support.

I spoke at the PCS fringe meeting ‘Fighting for our future, There is and alternative to austerity with former Greek finance minister Yanis Varoufakis

This was one of the most exhilarating, open and democratic and friendliest Labour Party conferences I have ever attended. 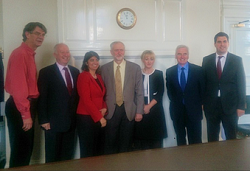 I was honoured to be appointed Shadow Channcellor and am very pleased to introduce the Shadow Treasury Team pictured below with Jeremy Corbyn and myself – Rob Marris, Andy MacDonald, Seema Malhotra, Rebecca Long-Bailey, and Richard Burgon.

In my speech to the Labour conference, I laid out his vision for a more equal and fairer society. I rejected the politics of austerity – promising to tackle the deficit by targeting corporate tax avoiders and not on the backs of the poor. I spoke about an alternative to austerity – democracy at work through trade union organising and democracy in the economy through common ownership. We will promote modern alternative public, cooperative, worker controlled, and genuinely mutual forms of ownership. Where money needs to be raised it will be raised from fairer, more progressive taxation. We will be lifting the burden from low and middle income-earners paying for a crisis they did not casue.

Over 100 students in all year groups celebrated their success at the Annual Academic Awards Evening at the Beck Theatre. I attended to show my support for the students and visited the school to meet the new headteacher.

Thousands of people flocked to a rally in Parliament Square to call on the Government not to give the go-ahead to a 3rd runway at Heathrow. I spoke alongside numerous MPs from all the parties in opposition to the 3rd Runway.

I attended the School’s 60th Anniversary assembly and visited the younger children in classrooms. The children and staff dressed in the fashions of each of the decades over the last 60 years. 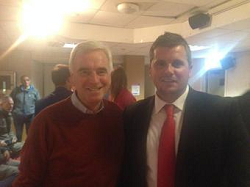 I was delighted to speak with so many members of the Merthyr Tydfil Trades Council at the Labour Club about our new era of politics. 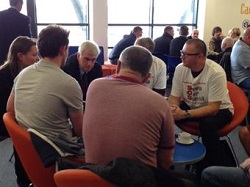 I spent the day with steelworkers facing job losses in Redcar and heard of their horrendous treatment. I met with the families of those affected by the closure of Teeside’s Redcar steel plant and was deeply saddened by their plight. I wanted them to know that they were not on their own. Their local Labour MPs and the Labour party will stand shoulder to shoulder with them and other steel workers in our country at this time.

These workers are highly skilled, and once gone will take generations to replace. The steel sector is also a vital part of our economy. The planes, trains, buses and cars that we use every day were likely built with British made steel. The metals industry is a huge part of our economy employing 330,000 people and worth £45.5bn to the UK economy. The simple truth is Britain needs the steel industry. And we can’t afford for the Tories to look the other way this time.

I spoke at the International Day of Action Against Toxic Trade Deals organised by Friends of the earth, Global Justice Now and War on Want. This is one of the most vibrant European people power movements seen in a generation

At the Rally I pledged that Labour will do all it can to stop the threat to basic human rights that is coming from the Government’s trade bill.

I hosted and spoke at the lobby on behalf of an estimated tens of thousands of people whose eyes have been irreparably damaged by refractive eye surgery: Lasik, Lasek, IOL and RLE (cataract surgery). 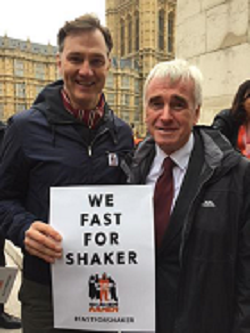 I attended the hunger Strike Press launch and along with other MPs and Celebrities including David Morrisey I “Fasted for shaker.” His ordeal has been a historic miscarriage of justice & has gone on far too long. As chair of the Shaker Aamer Parliamentary Group, I am proud to have contributed to securing his release.

I spoke at Labour’s Black and Minority ethnic conference accompanying local Counsellor June Nelson, who has championed equal rights nationally and in our community. 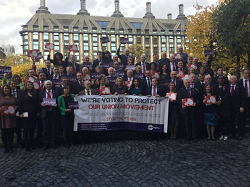 MPs Showing their opposition to the Trade Union Bill 28th

Labour MPs came together to demonstrate their opposition to the Conservatives Trade Union Bill which sets out to attack the ability of trade union members to take industrial action and aims to curb political freedoms in the UK.

Below is a list of the interventions I have made on the floor of the House of Commons this month. Please click the link below to take you to the debate set out in the Hansard.