I attended the conference in Perth, to speak on the issue of TTIP at a packed meeting.

This was a function for HACAN organised by Momentum, to support the campaign against the 3rd Runway. 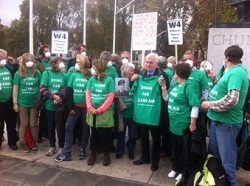 I met with my constituents outside Parliament to raise the huge issue of air pollution in London and the implications of the expansion of Heathrow Airport. The area surrounding Heathrow already suffers from air pollution above EU legal limits.

I attended the rally against the Trade Union Bill and spoke to highlight the threat of the Bill to the future of trade unionism in this country and to express my support and solidarity to the campaigners and all the trade unionist that will be campaigning in the coming months to defeat this Bill or prevent its implementation.

I attended this reception which I host each year for the members of the Trade Union coordinating group. It is a way in which the trade Union Representatives can mix with MPs to talk about the issues that are facing Trade Unions in this Country and to plan their future campaigns.

In my speech at the beginning of the demonstration I shared my views with the students that I believe Education is a basic human right. It is not a commodity to be bought and sold. For generations now, one generation has handed the baton onto the next, to try to ensure that the next generation has a better quality of life than the last. This government is betraying you and future generations. We need to oppose it and I’m here in solidarity with that opposition. I urged the students to ensure the demonstration was peaceful and all were kept safe. 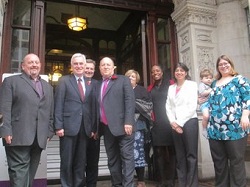 To coincide with Living Wage week, this morning I met with the Labour run Croydon Council to congratulate them on recently becoming an accredited Living Wage employer.

I also visited a bus depot for drivers who children with special educational needs to and from school. This service was recently taken back in house by the council and these workers now receive a living wage. As a result you can see the smiles on their faces. 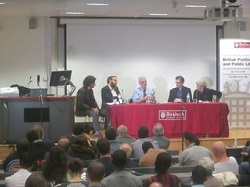 As a former student, and honorary fellow I was delighted to be back at Birkbeck College to speak about my politics and current plans as shadow chancellor before opening up to a Q and A session with staff and students. The meeting was packed and the questions were as you would expect most interesting.

30 students from Langley College visited the Houses of Parliament. I was happy to meet with the students and their tutor after their tour to discuss how Parliament works and my role as an MP.

I spoke at the Croydon assembly. This was a follow up assembly from last year’s assembly which was organised by the Croydon Trade Union Council and other campaigners. It was an interesting discussion about the issues facing not just Croydon but London and the Country as a whole about the Austerity measures that have been implemented by the Government. I was on the platform with Christine Blower from the National Union of Teachers. She was emphasising concerns about the cuts to the public sector and the impact on education and the pressure teachers are working under as a result of these cutbacks. There were a range of speakers on different issues from Health Services to the Economy which were again highlighting the implications of the austerity measures being introduced by the Government’s cut back in Public Services and the pressures on wages and working conditions.

I joined the parade in Barra Hall Park and we all proceeded for the service of Remembrance in St Mary’s Church which was followed by a short Act of Remembrance at the Cenotaph at 11 am. This was a moving event as always but there was an extra sadness with the recent passing away of my fried Father Peter Homewood, who usually takes this service.

I spoke to trade unionists and campaigners outside Parliament at the Kill the Bill rally. This Tory Trade Union Bill is about closing down Trade Unions once and for all. We will try and defeat them in the Lords. If we can’t, we need to come together in solidarity on a scale we’ve not seen maybe for a generation.

We cannot allow any individual trade unionists or any trade unions to be picked off one by one by this legislation. It is an attack on basic civil liberties. As Conservative MP David Davies commented, this Bill is more akin to legislation under the fascist dictator, General Franco. 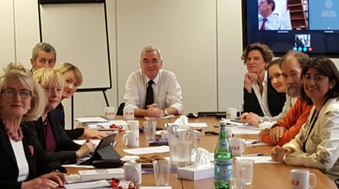 I was proud to convene the preliminary meeting of Labour’s economic advisory committee to advise us on the development and implementation of our economic strategy. We will draw on the unchallengeable expertise of some of the world’s leading economic thinkers. The economic team includes Joseph Stiglitz, Thomas Piketty, David Blanchflower, Simon Wren Lewis, Ann Pettifor, Anastasia Nesvetailova, and Mariana Mazzucato,

I attended Michael Meacher’s funeral at St Mary’s Anglican Church in Wimbledon Village. Michaelwas an astute politician, and a “really decent human being” who devoted his whole life to the Labour Party. He was light years ahead of his time on some issues such as climate change and bank deregulation. I was proud to call him a friend.

We chose to devote a section of this’s Opposition day to set the scene for the following week’s autumn statement and comprehensive spending review. This was be the last chance many MPs from across the House will have to put their case to the Chancellor before he comes to his final conclusions on his spending plans and economic strategy for the coming period. Please click the link below to take you to the debate set out in the

In my keynote speech at the Imperial College I set out a vision for a Labour economy in which the UK diversifies, and becomes the technological as well as the financial centre of Europe. I promised that Labour will make the UK one of the world’s great technology centres but also provide security for the army of new workers, many self-employed, who have been casualised by the internet. In addition Labour will establish “an Innovation Policy Council with a clear, mission-led goal to boost research and development spending and maximise the social and economic benefits from that expenditure”. The full speech can be read on by blog at

I was delighted to meet with Yanis Varoufakis prior to the TUCG Rally. There was a great atmosphere and good debate. I spoke to explain the alternatives to austerity, highlighting the need for investment in our infrastructure and skills base.

I made it back it time for the last half hour of the conference, which was an interesting discussion of the issues being raised by our Mayoral candidate, Sadiq Khan.

I was interviewed by Andrew Marr on Terrorism, Syria and the UK economy. To see the interview follow the link below.

In my response to the Chancellors Autumn Statement I highlighted that over the past five years, the Chancellor has barely set a target that he has not missed or ignored. You can read the full speech on my blog page.

I was attended the Parliamentary debate on Heathrow and I am most grateful to Andy Slaughter for reading out my statement. I am formally not able to speak in debates like this as it is outside my remit but was able to express my opposition to a 3rd runway, as I did in the statement read by Andy. 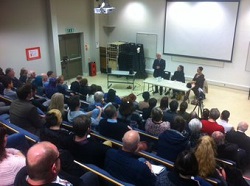 I was delighted to speak to so many young people at the Havering Young Labour members meeting and share with them the view that new Labour leadership want to involve people much more in politics.

I had a terrific day in Oldham with all the supporters who came out to help. We received a very positive response on the doorstep for Labour’s candidate Cllr Jim McMahon. A fundraising dinner followed at which I was honored to pay tribute to my old friend Michael Meacher. 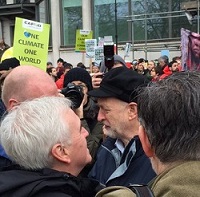 I was pleased to join the Climate Change demonstration with Jeremy Corbyn and other Labour colleagues. This is such an important issue it cannot be ignored. The demonstration was convened to show the large scale support there is for decisive action to be agreed by world leaders at the Paris summit on climate change this month.