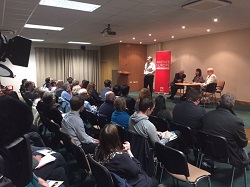 I spoke at another public meeting alongside Pat Glass and Liz Kendall arguing the case for remaining in the EU. I came from a Eurosceptic background but not Euro exit. 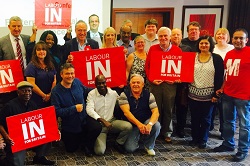 Alongside my old friend John Bond I spoke to the Regional Conference if USDAW, the shopworkers’ union on the economic policies of labour, that we are developing and on the critical importance of remaining in the EU to protect employment and trade union rights.

We spent a rainy afternoon in Tooting campaigning with our brilliant local candidate Dr Rosena Allin-Khan. 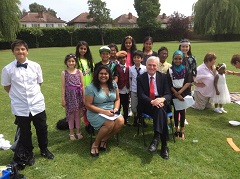 I attended Hayes Park School’s Queen’s 90th Birthday Street Party. After singing the national anthem each year did a performance. I particularly enjoyed the ‘dances from the decades’ and the children finished singing happy Birthday to the Queen. After I presented awards to the winners of the portraits and cards competition we all sang Happy Birthday to the Queen and tucked into street party food. It was a great afternoon.

I opened St Martin’s Church Fair in West Drayton. It was lovely meeting so many constituents and have a cup of tea and a cake with them. The Church plays a vital role in the local community and I was so pleased to be able to support this fundraising event.

I attended Dr Triplett’s Fete where Cynthia, my wife, is a governor and again it was good to meet all the teachers and the head. I visited some of the stalls and met lots of the children at Dr Triplett’s where my son went to school some years ago.

I drew the raffle at Botwell Fair. Lots of wonderful prizes as usual. The fair was extremely busy and very successful in fundraising for the local Catholic Church which supports many members of the local community and is always there willing to help us in our community activities. 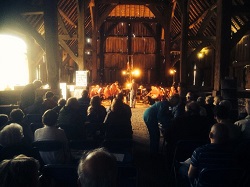 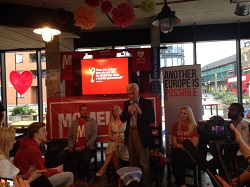 At the start of the European football competition Momentum organised a viewing of the first England match and also a discussion about football and its future in this Country. Unfortunately they advertised me to speak as a football pundit and my punditing was so far wrong I predicted 2 goals for England when I didn’t expect there would be one goal either side. It came out with a draw which was disappointing but it was a good night anyway.

I was a guest on the Peston Show and when asked about Brexit I highlighted the fact that if Tory Brexit goes through there will be a Conservative Government in power. Boris Johnson will have a huge influence on that Government and may well be Prime Minister in due course. Our public services will be at risk as a result of that. There will be cuts that will induce further austerity, employment rights will be savaged because that is what Boris has been campaigning on all these years. The risk will come from a Conservative party still in government and as a result of that the economic leap in the dark will have huge consequences.

I spoke at the Baker’s Union national conference in Southport about how Labour would live within its means and how the deficit can be reduced without the need for austerity. I argued that the Tories’ approach on the economy was ideologically driven and highlighted the irony of Tories criticising Jeremy’s idea of rail renationalisation whilst George Osbourne was selling off just about every remaining British asset to the Chinese state bank.

I used the final Opposition Day Debate before the European Union Referendum vote on Thursday 23 June to highlight the positive case to remain and reform the EU, and reject a Tory Brexit. Labour’s vision of Europe is one of fairer pay and better working conditions – delivering investment, opportunities and rights for the people of the UK.

I spoke at the RMT Cuba garden Party. The garden party was set by many years ago under the late General Secretary Bob Crow’s initiative to support Cuba in its struggles against the blockade that had been mounted against it by the US and also to campaign for the release of the Miami 5 Political Prisoners in the US. As a result of the Campaigning worldwide and with Barak Obama in Government the blockade has been lifted and the 5 were released and harmonious relationships are now being developed between Cuba and America. This was a major victory. The RMT Cuba Solidarity night has always been a major feature of the Labour and Trade Union movement programme for the year and I thoroughly enjoyed meeting up with lots of old friends and campaigning supporters. 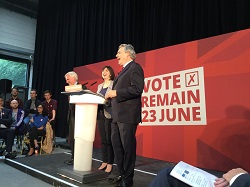 I made the case for Labour to remain in Europe on a reformed agenda in Manchester along with Gordon Brown and Lucy Powell.  I explained that at present, Britain receives less than the per capita EU average in funding from the European Investment Bank (EIB) due to Tory cuts and changes to the regional infrastructure required to make successful funding bids in England, which have weakened its effectiveness compared to the devolved administrations.

Under the ‘Juncker Plan’, the EIB is set to increase infrastructure and investment spending across Europe by €320 billion. The UK’s current share of the EIB’s capital is 16 per cent, so if the UK was able to raise a fair share of the additional investment also to 16 per cent then this would work out to £35 billion for the UK by 2019/20.

For the North of England, the total extra funding boost would be £8.3bn. This would be enough to finance the proposed High Speed 3 and help make the Northern Powerhouse a reality. 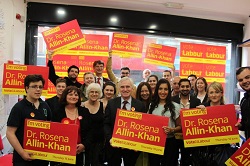 Congratulations to Dr Rosena Allin-Khan on winning this seat for labour with a significantly increased majority.

I sent my deepest sympathy and condolences to Jo Cox’s family. I am deeply saddened and shocked by Jo’s brutal murder on Thursday afternoon whilst she was in her constituency doing the job she was elected to do, serving her community. Jo was a brave compassionate MP who will be dearly missed. She was a wonderful, kind, caring person who was liked and respected in all parts of the House.

This attack was an assault on democracy itself, an attack on the right of everyone to have their say in how our country is run, and for those that the people elect to be able to listen to and represent them without fear or favour. We must not allow those who peddle hatred, terror and division to poison and degrade our national and political life.

I attended a very moving service on Friday Evening in the Chapel in Westminster Hall followed by the Vigil. All members of the House came together to pay Tribute to Jo when Parliament was recalled on Monday. 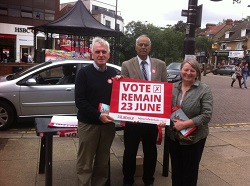 I  held a European Union Street Stall in Hayes Town Centre explaining to local people the issues that Labour campaigning on to Stay in the EU.

I attended the Powerday application hearing at the Civic Centre where the controversial plans to develop land near West Drayton’s High Street to build a new recycling centre were thrown out for a third time. Hillingdon Council’s Major Application Committee unanimously voted to refuse the application due to the impact it would have on highways, transport and air quality.

A major victory for the 231 residents who wrote letters of objection to the council, and a petition opposing the development attracted over 3,000 signatures.

“People are waking up to turmoil in the markets and the pound crashing, and fearing the emergency budget the Chancellor threatened to hike their taxes and cut public services. “The Government must now take steps to stabilise the economy, and to protect jobs, pensions and wages. Labour will not allow any instability to be paid for by the working people of this country”

During the interview with Andrew Neil I explained that Jeremy is not resigning. He was elected 9 months ago on the biggest mandate of any political leader in our country. The people who are soverign in our party are the members who elected Jeremy and he will remain. When asked about resignations of the Shadow Cabinet I explained that we will replace them with other members who are willing to serve. What is so disappointing is that we have virtually got no government at the moment. The promises that were made in the referendum are being renaged upon almost on an hourly basis. We have got to get the best deal we possibly can in Europe. The Country is in an extremely difficult position. Now is the time for the opposition to hold it together. In looking at the electoral tests that Jeremy has faced since he became leader, Labour overwhelmingly won the Oldham by-election, we increased our majorities in every other parliamentary election. The Local Government election matched the highest we have ever achieved under Ed Miliband and we won every mayoral election. We are now a power for building a majority Government for Labour.

Following the PLP meeting of Labour MPs at 6pm I walked across to Parliament Square to a vibrant congregation of approximately 10,000 people protesting at the way in which Labour MPs were calling for the resignation of our Leader, Jeremy Corbyn. Many party members feel this is an undermining of democracy, ignoring the overwhelming vote that Jeremy received from party members less than 9 months ago. I reassured the gathering that Jeremy is staying in place as Leader.

This week Labour has been debating key issues in the Finance Bill including climate change, tax avoidance, and cuts to corporation tax and capital gains tax.

The Finance Act Bill refers to the headline fiscal (budgetary) legislation enacted by the UK Parliament, containing multiple provisions as to taxes, duties, exemptions and reliefs at least once per year, and in particular setting out the principal tax rates for each fiscal year. It is an incredibly important piece of legislation and usually amounts to month and months of preparation and work.

Rising young star, Rebecca Long Bailey, Labour’s Shadow Chief Secretary to the Treasury – despite taking over her position at short notice – has been outstanding in her leadership of Labours scrutiny of, and opposition to, the Finance Bill (27 -28th June). The debates will continue next week.

I spoke at the launch of ‘A Manifesto for Collective Bargaining’, in Parliament, following the publication of the contribution of the Institute of Employment Rights to the Workplace 2020 project. The IER provides us yet again with a significant contribution to the debate now underway in the Labour Party about reforms to Employment Law that will be implemented when Labour returns to power.  This expert advice is a vital element of our policymaking process.

Opposition Day Debate on the E U Referendum 29th

In my opposition day speech on the E U Referendum I highlighted that fact that this is no time for partisanship and party political game playing when the country is facing such serious challenges. The country will expect us to work together not uncritically but co-operatively in times of unprecedented political and economic turmoil.

The Leave vote in last week’s referendum campaign has left all of us with an immense series of tasks. The economic situation alone is a major challenge for us all. I highlighted the lack of growth, current account deficit, business investment in decline, uncertainties for those trading in Europe and threats to community coheasion.

I asked the Chancellor a series of questions which included:

What steps is the government taking to maintain current programme funding?

What plans does the government have for the UK’s stake in the European Investment Bank?

What steps will the government be taking to ensure the voice of UK finance continues to be heard?

What mechanisms will the government be putting in place to work with local governments and city mayors to protect these communities and help overcome these divisive actions?