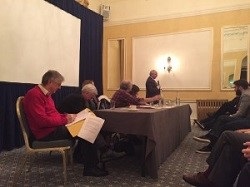 I received a very warm welcome at the Jeremy for Leader Rally at Cardiff City Hall along with Matt Wrack, General Secretary FBU, Shavanah Taj – Wales Secretary and Cllr Sue Lent- deputy leader of Cardiff City Council. I spoke about the range of policies that we have been developing which will enable a Labour Government to bring about a desperately needed transformation of our society and economic power. 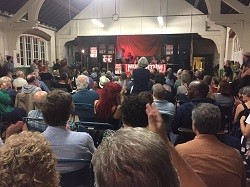 I gave the concluding speech at a very lively meeting in St Barnabas Church hall alongside an extensive line up of Activists from Momentum and the various branches of the Walthamstow CLP as well as Matt Wrack General Secretary Fire Brigades Union, David Rosenberg Jewish Socialist Group and Kiri Tunks, Vice-President National Union of Teachers. Topics included the Very British Coup, Ending the privatisation of our NHS and ensuring the money that should go into patients care no longer goes into pockets of private shareholders. Taking back control of our energy system to eradicate fuel poverty. Building Houses and creating a National Education system.

A great day out for local families and I performed my traditional role of drawing the raffle.

I joined Mark Hopwood, Great Western Railway managing director at Hayes and Harlington Station to celebrate the first Electrostar going into service. The first two of 45 Bombardier Class 387 EMUs, also known as Electrostar, began operation on GWR services between Hayes & Harlington and London Paddington. The introduction is part of an initiative to provide greater capacity and faster, more frequent services for commuters in and out of London. This upgrade will provide much needed additional capacity and faster journey times.

I travel on this train route almost daily and like my constituents I have been very concerned about the frequency and overcrowding on trains. This is why I was very pleased to be given the opportunity to take part in the launch of this new train service which I’ve been campaigning for. The new service is more environmentally friendly and also more efficient as it carries more passengers.

I spoke at the launch report on the impact of the closure of the Independent Living Fund one year on. The main findings from the study are that we now have a postcode lottery for former ILF recipients with some Councils committing to protecting support packages and others systematically slashing them. The main key policy demand is a need for a national social care system independent of local authorities.

Labour opposed measures in the Finance Bill to cut Corporation Tax and Capital Gains Tax currently being debated in the House of Commons at Report Stage and Third Reading.

The Finance Bill has unfairness at its very core – it includes tax cuts to Corporation Tax and Capital Gains tax whilst doing nothing to remedy the Tories’ failings on fairness and equality. Rebecca Long-Bailey, The Chief Secretary to the Treasury called for a wide ranging review of the UK tax gap and reform proposals in this Finance Bill. 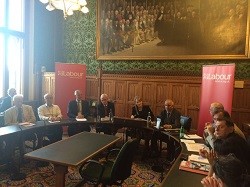 I launched the report by Professor Prem Sikka on the role of the HMRC, the tax collecting body. The report highlighted how staff cuts had impacted upon the tackeling of tax evasion and avoidance. Also it highlighted how representatives of accountancy firms and corporations dominated policy making.

I welcome this very important contribution to the debate about tax in this country, and I would like to thank Professor Prem Sikka and his panel of experts for their enormous contribution. The public want to urgently see more action on tax avoidance but the Government have made things words by cutting staff and resources at HMRC. This report lends further support to something we have been arguing for years: that HMRC needs more accountability and resources to deal with tax avoidance and evasion. Labour will be looking at the report’s recommendations in great detail while we develop our policies in this area, and also discussing how to take the review forward to the next stage.

I accompanied Anne-Marie O’Sullivan, along with her local MP Keir Starmer QC to hand in to 10 Downing Street her official complaint into the circumstances that led to the death of her father, Michael O’Sullivan in 2013. The complaint follows the damning narrative verdict given by London Senior Coroner Mary Hassell in January 2014, which upheld that the intense anxiety that triggered Mr O’Sullivan’s suicide “was caused by his recent assessment by the Department for Department for Work and Pensions as being fit for work, and his view of the likely consequences of that”.

The death of Michael O’Sullivan is a profound tragedy for which there can never be any remedy. It is sadly symptomatic of a wider inhumane and failing incapacity benefit conversion process. The Work Capability Assessment is not fit for purpose. The callous approach adopted by this Government is shameful and requires and urgent and systematic overhaul. 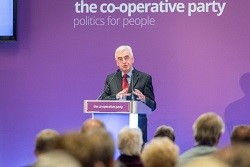 I gave a speech to the Co-op Party’s annual conference outlining labour’s plans to double the size of the co-operative sector in our economy, in line with the US and Germany. I paid tribute to the Co-operative Party which is now 99 years old and looking forward to its century next year.

At a global conference on 10 September organised by Disabled People Against Cuts (DPAC), l spoke of the desperate need. McDonnell also talked of the possibility of a Universal Basic Income. And his words struck right to the heart of what the DPAC conference was about: I spoke at a global conference that featured speakers from Canada, Germany, Greece and Ireland. The overriding thrust was that cooperation, both nationally and internationally, was needed to improve the lives of disabled people. This would mean reversing many of the Conservative government’s cuts, and bringing in new laws and policies – the right to an equal, independent life for disabled people.

I heard harrowing accounts of the effects of funding cuts on people’s lives. The ILF scheme, which helped nearly 18,000 disabled people with high support needs to live independently, closed last year. The government cited that it was “financially unsustainable”. But since it ended, funds have been transferred to local authorities to allocate. And some people have had their money cut by up to 68%.

I spoke at the General Federation of Trade Unions fringe meeting along with Ian Lavery, Prof Keith Ewing, John Hendy, Len McCluskey, Jane Carolan, Carolyn Jones. The campaign which has been working towards a comprehensive revision of workers’ rights launched its     ‘manifest for Labour Law’. 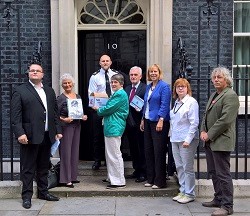 I joined Ruth Cadbury, Harmondsworth residents and anti-runway campaigners in delivering 1,000 petition cards to 10 Downing Street as the final decision approaches on airport expansion in the south-east. The petition cards were signed over two days at two local events in west London recently and called on Theresa May, who represents nearby Maidenhead, to oppose the expansion of the country’s largest airport.

The visit to Downing Street sends a strong reminder to the Prime Minister that residents around Heathrow Airport are firmly opposed to its expansion – whether it is on the grounds of the destruction of thousands of homes, noise, pollution, costs to the taxpayer for the infrastructure or climate change.

The meeting focused focued on the key issue of electing a Labour Leader who will represent the labour movement – fighting austerity and racism, taking key assets like our railways back into public ownership, saving others like our Fire Service and Post Offices, defending trade union rights and, critically, whose actions will match his words when it comes to the next Labour Government and ridding Britain of Thatcher’s anti-union laws. 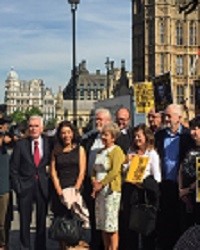 I joined campaigners to ask Amber Rudd for an inquiry into events at Orgreave which has received cross party and trade union support. 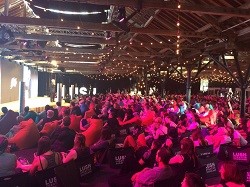 I spoke at the Lush international staff meeting where around 1600 members of their staff from various countries around the world came together to celebrate their achievements. Participants were keen to hear about labour’s post-Brexit plans and how this would effect British exporters such as Lush and the effects for Britain’s trading partners internationally.

I was pleased to join Jeremy Corbyn and Rebecca Long-Bailey today at Bloomberg headquarters to set out how Labour will rebuild and transform our economy so that no community is left behind.

I formed part of the panel on Question Time in Salisbury alongeside Joanna Cherry MP, Anna Soubry MP, Alistair Campbell and Quentin Letts. Topic of discussion included Gammer Schools, Europe and how the Labour Party will deal with Brexit and of course the Labour leadership and how we will unite the party and win the next election.

I spoke at the Employments rights conference at Greenwich University about blacklisting, bullying and whistleblowing, outlining the need for new laws to outlaw blacklisting. 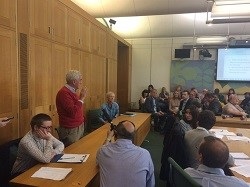 I was very proud to host the launch of IWGB Union foster care workers branch in Parliament. 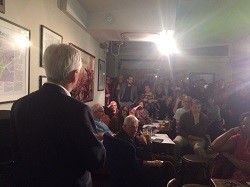 I attended the Jeremy for labour phone bank in Clapham to thank everyone for all the call they have made during our campaign. 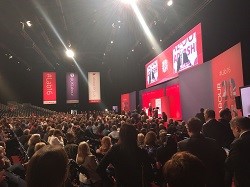 Conference started on 24th September with a triumphant victory for Jeremy with almost 62% of the vote – an even bigger mandate than a year ago. This was a personal “vindication” that had increased Jeremy’s power and authority to create a mass democratic movement from the grassroots upwards.Jeremy pledged to reward Labour’s mass membership with more power over the running of the party Jeremy thanked Owen Smith, and urged the “Labour family” to unite after the summer-long contest. Jeremy said ‘We have much more in common than that which divides us. Let’s wipe that slate clean from today and get on with the work we’ve got to do as a party together.’

Some of the highlights included: 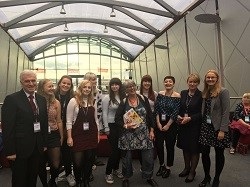 I attended the packed Women’s conference which highlighted the economic stagnation caused by austerity has seen a desperate drop in living standards for many people but it is women, above all, who have borne the brunt of this failed and destructive economic experiment. The Women’s Budget Group has found that 86 percent of the Government’s so-called tax and welfare ‘savings’ have come at the expense of women.

In his speech Jeremy said “We must ensure that the Labour Party remains at the forefront of championing policies which promote equality. That is why, earlier this week I urged the NEC to vote through a policy-making women’s conference, so that the voice of women across our movement can be heard loud and clear in our policy-making process. “ 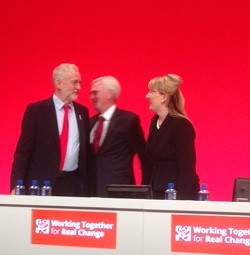 In my speech to Labour Party conference I  set out how Labour will drop the failures of the past and rewrite the rules of our economy to protect essential industries, promote new sectors, and foster a British manufacturing renaissance based on small businesses and employee-owned firms.Together we can rebuild and radically transform Britain’s economy to be sustainable and fair, and create a society where prosperity is shared by all.

Jeremy’s speech focused on winning power in local and national government, to deliver the real change our country so desperately needs. He said the central task of the whole Labour party, must be to rebuild trust and support to win the next general election and form the next government.

“That is the government I am determined to lead, to win power to change Britain for the benefit of working people. And let me pay particular tribute to those parliamentary colleagues who stepped forward in the summer to fill the gaps in the shadow cabinet and ensure that Labour could function as an effective opposition in parliament.

They didn’t seek office, but they stepped up when their party and in fact the country needed them to serve. They all deserve the respect and gratitude of our party and movement. And this conference should thank them today, they are our future.” 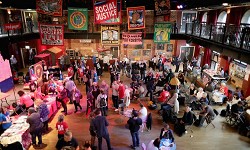 Momentum hosted ‘The World Transformed’ – a four day celebration of politics, art, culture and community. Powered by a coalition of grassroots groups, they took over the Black-E in Liverpool running alongside the Labour Party Conference.