I attended the DASH awards ceremony at West Drayton Community Centre. DASH is a local group that works with disabled people. I have worked with them consistently over the last 30 years. It was a wonderful event in which large numbers of DASH members turned up the celebrate the achievements of their members. Lots of parents came along as well but also I gave out awards to the Trustees who served DASH for a number of years in raising funds and supporting the group organising different events. They ventured out now into a wide range of sporting activities for people with disabilities including sitting football for some of the older people with disabilities in our centres. It was a wonderful event and I thoroughly enjoyed it.

We launched a campaign for the Dower House. A large group of residents turned up to demonstrate outside the Derelict Dower House which was set alight after a failed planning application 7 years ago. Despite the council’s efforts to force the owner to restore the house it is still in a derelict form. We sent a letter signed by the residents and myself to the owner and we will be campaigning to make sure he restores the building.

I spoke at UNITEs Finance and Legal National Industrial Sector Committee meeting about the development of collective bargaining in the finance sector. We also had lengthy discussion about the BREXIT for the finance sector and how we could protect jobs and strengthen workers’ rights.

At Treasury Questions I asked the Chancellor if he was prepared to turn this country into a tax haven. If that means competing with the likes of Ireland on the 12.5% corporation tax rate on top of existing Tory tax cuts it means, giving away more than £100 billion to corporations over the next five. That is equivalent to almost 5p on the basic rate of income tax. How then does the Chancellor ever propose to solve the funding crisis in the NHS and social care, given that this morning the Office for Budget Responsibility thinks that public finances are on an unsustainable path?

I hosted the United Black Labour/ BARAC UK ‘Race Equality Round Table meeting in the House of Commons to launch BARAC’s vision paper – 2025: A Vision for Race Equality in Britain. United Black Labour is a platform for an exchange of ideas, discussion and development of a political consensus around race equality for black members of the Labour Party.

This was a meeting convened by the minister Robert Halfon to discuss the merger of local FE colleges. I attended to voice the concerns of Uxbridge College whereby a merger with Harrow is being undertaken. There needs to be further consideration of any additional mergers with colleges to ensure there is a continuation of good quality provision by Uxbridge College based at the Hayes Campus for those people looking for further education and training.

I spoke at a rally of striking British Airways cabin crew at Bedfont FC, a football ground beneath the flightpath near Heathrow. The staff, who work for BA’s Mixed Fleet operation and are members of the Unite union, have begun a second strike in protest against what they describe as “poverty pay”.

All cabin crew who have joined BA since that dispute ended are in Mixed Fleet. They are employed on inferior terms to their longer-serving colleagues, and operate a range of short- and long-haul flights from Heathrow.

This was an extremely well attended meeting which I was re-elected as chair for another year. We laid out our plans for the coming year, applications for funds and the activities we want to undertake on the local estates to encourage play opportunities. All of this is of course dependent on voluntary effort. We are most grateful to the Hasbrough volunteers for all their support particularly refurbishing the hall and helping organise the winter fest for children. I’ve invited them to the House of Commons as my way of thanking them. 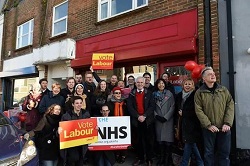 I joined hundreds of people – including doctors, nurses, other NHS staff and union members to march through Brighton to a protest rally in front of Brighton Station. I was heartened by the cheers along the way and the number of people who joined the march en route.

At the rally I spoke about the deficit at the Brighton and Sussex University Hospitals NHS Trust, the latest closure of a doctors’ surgery, the Patient Transport Service shambles under Coperforma and the pressures on adult social care. The only reason health services are still going is because of the fantastic extra work being put in by hospital staff and other NHS workers from doctors and nurses to drivers, cleaners and support staff. After the rally I opened the new Labour Party offices in Dorset Street, Brighton.

We covered the usual topics of BREXIT and the Labour Party and the role that we will be playing in the coming months. The emphasis was of course on the difficult period that is facing us and the challenges we have.

The Charter for Budget Responsibility 24th

Under this new charter the OBR will assume the role of bystander rather than arbiter of whether or not the economy is facing a negative shock. This is a huge power grab by the Chancellor, as it means he can decide when and what such a “shock” will be, and therefore he can suspend his rules when he likes, and make up his targets as he goes along.

This Charter also continues with the practise of lumping infrastructure spending in with day-to-day spending, meaning that there will be insufficient scope for investment in our economy, which could hinder growth and therefore our ability to reduce the national debt. 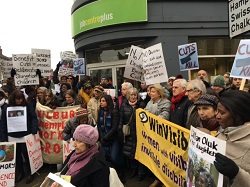 I attended a Vigil in memory of Lawrence Bond outside Kentish Town Jobcentre which was organised by Kilburn Unemployed Workers Group (KUWG) with WinVisible. Lawrence Bond tragically and suddenly died after being found fit for work.

I attended the annual Botwell Pensioners New Year’s Lunch with over 300 people there. I met with lots of old friends and we had a really enjoyable sing song. I also thanked the parish priest for all the work they do not only in bringing people together to tackle local issues but also in bringing us together when international concerns arise.