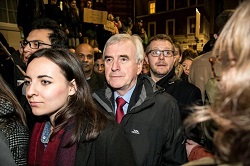 I was saddened to see a British Prime Minister walking hand in hand with Donald Trump on the same day he turned America’s back on Syria’s refugees. So last night I joined the packed ‘Stand up to Trump’ demo outside 10 Downing Street. There was so many people I couldn’t get to the stage to speak but I send my full support and solidarity to all the people who were there and to those who attended protests across the rest of the UK in such huge numbers.

I attended the Cantelowes Branch of the Holborn and St Pancras CLP fundraising dinner at the Café Renoir in Kentish Town. It was a great evening helping them to raise their financial contribution to the CLP as their membership increases in size.

I attended a fundraising dinner in my colleague and friend, Rebecca Long Bailey’s constituency Salford and Eccles at the Swinton Park Golf Club. 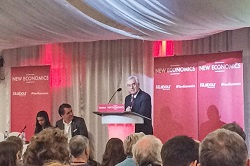 At Labour’s first Regional Economic Conference in Liverpool I set out how the next Labour government will close the gap in public investment between the North and the South. The day was hugely successful with substantial participation from delegates. There were good common sense ideas and discussions in the workshops. 400 people attended a packed conference.

I spent the day campaigning in Copeland for our brilliant local candidate Gillian Troughton, a former NHS doctor. The following morning we traveled on a on a local train to highlight the lack of investment, travelling in carriages that are over 40 years old! I was saddened by the result despite a terrific campaign.

I attended the phone bank along with members of the Shadow Treasury Team to urge people in Copeland to vote for Gill Troughton on 23rd Feb to protect their local hospital. 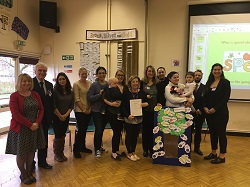 I presented Hayes Park School with the prestigious Marjorie Boxall Quality Mark Award by national charity the Nurture Group Network. This accolade is awarded to schools who demonstrate exemplary practice in supporting a range of pupil needs in their school nurture groups.  Nurture groups are in-school, teacher-led groups that help children overcome barriers to making the most of school and learning.  The dedication and hard work of the staff at Hayes Park School is outstanding and I congratulate them on winning this well-deserved award”

I spoke at the College Lecturers Union’s conference on the future of education and the consequences of Brexit. I asked Sir Bob Kerslake to head up a review into the Treasury because we needed to have a serious and thorough examination of one of the most important pillars of government, and the cornerstone of economic policy making in our country. “This review will help shape Labour’s economic policy, as well as being a first important step in setting a new direction for the Treasury in the 21st Century.

Lord Kerslake concluded “The Treasury is a small but very powerful department. To make the most of its very capable staff, it needs to fundamentally change both what it does and how it does it. It should focus on its core economic and financial roles and work in a much more open and collaborative way. The impact of Brexit reinforces this need for change”.

I am are deeply grateful for the contribution from all the independent members of the review’s panel, who represented many different fields of expertise, and who gave up a considerable amount of their time to take part. And I would also like thank Sir Bob Kerslake for his time, energy and expertise in producing this report for Labour.

I joined the local picket lines at Heathrow Airport in support of the BA cabin crew fighting for decent pay. 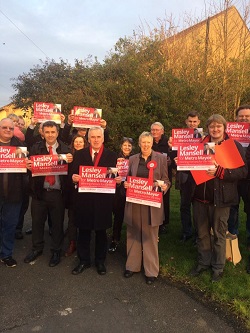 After an afternoon of door knocking in Locklease ward with members and councillors I went on to speak at Fairfield High School in Bristol. I spoke alongside Locklease Labour Councilors and Lesley Mansell the Labour candidate for Metro Mayor about Labours plans for the economy.

At the LGA Labour Group Council Leaders’ Summit I led a discussion on Public Services under a Labour Government. The session was chaired by Cllr Sharon Taylor, Deputy Leader, LGA Labour Group.

I spoke about the challenges for the modern world of work posed by the so called ‘gig economy’ and the changing nature of the threat to job security in the new world of work and how we can help build the economy and society of the future that secures sustainable, well paid jobs. I outlined how the next Labour government will be completely committed to fixing our rigged economy and promoting the co-operative ownership of the wealth we produce, doubling the size of the co-operative sector. We’ll support the development of platform co-operatives instead of allowing new technologies to be exploited for the benefit of an elite few. 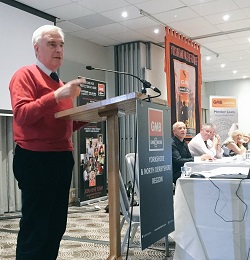 I spoke at the GMB Branch Weekend at the Holiday Inn in Garforth, Leeds, about the economy, work, fair taxation & ending in work poverty to a packed audience of enthusiastic GMB Campaigners. 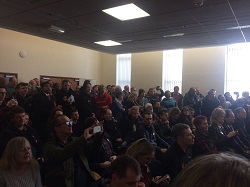 I spent a great day campaigning with local volunteers and hundreds & hundreds of Labour activists who poured into Stoke supporting our candidate Gareth Snell to a Labour victory in the by-election on Thursday. Winning Stoke and defeating UKIP was a tremendous victory for our movement. 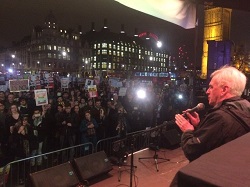 I spoke to thousands of protesters at they demonstrated against Donald Trump’s visit to the UK. A state visit is an honour that Donald Trump does not deserve. 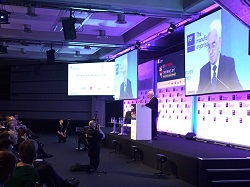 I delivered a keynote speech and the EEF National Manufacturing Conference just a few weeks before the Budget. I spoke about Labour’s vision for a post Brexit Britain, including our response and consultation on the Industrial Strategy, Labour’s commitment to setting up a National Investment Bank and regional development banks, the 4th Industrial Revolution, spending on Research and Development and the delivery of a fully-fibre optic broadband connectivity, across the whole country. My full speech can be viewed by clicking here http://www.john-mcdonnell.net/shadow_chancellor_s_speech_to_the_engineering_employers_federation

I joined MPs from all parties in swearing to tackle mental illness at an event in Parliament to show my support for mental health research. Mental illness should not be seen as an inevitable part of life. The current state of mental health treatment would simply never be accepted for a physical condition.

The Party of European Socialists hosted a two day event in Central London to assess the progress of Brexit and its potential impact on Britain and across the EU. I attended to reception in the Attlee Suite, Portcullis House on 23rd and spoke at the conference about Getting the Best Deal for Jobs and Workers on the following day.

I joined all those cinema workers campaigning today for a fair and decent wage they can live off. The demo assembled in Leicester Square at 12 noon and walked around to some of the other cinemas.

This Girl Can Campaign 27th 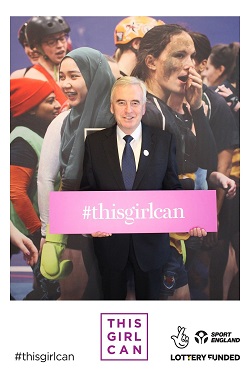 I met the This Girl Can team in Parliament to mark the launch of the next phase of the National Lottery funded campaign. I’m proud to support Sport England’s This Girl Can campaign to get more women and girls active. I am delighted that This Girl Can is showing a variety of sports that can be enjoyed at any stage of life, regardless of age, ability or experience.

I’d urge local groups and organisations involved in arranging sport and exercise clubs and classes for women to get involved in the campaign too by registering as supporters and accessing all of the free tools available at www.thisgirlcan.org.uk

HPA Visit to the House of Commons

I spoke at the BCC Annual Conference on the issue of growing Business in the regions and nations setting out our policies for supporting small businesses.

I was sad to hear of Gerald Kaufman’s death. He was a tremendously dedicated servant of his constituency and our party. He was a man of absolute principle and will be missed.