This month we experienced the attack on Parliament and the tragic deaths of PC Keith Palmer and the other victim. I was in Parliament that ay and during the lockdown procedures was locked in the Commons chamber for 5 hours. As news filtered through to us of the tragic events we sent our condolences and sympathies to the victims and their families. We were determined to carry on with our Parliamentary business the next day no matter what.

In response to the Chancellor’s statement on regulations denying 150,000 disabled people access to personal independence payments, I asked the Chancellor, in the Chamber, if he would rule out further unfair tax giveaways, such as cutting the top rate of income tax to 40p in this Parliament. Otherwise, it is clear that he wants tax giveaways for the wealthy few and austerity for the most vulnerable in our society. 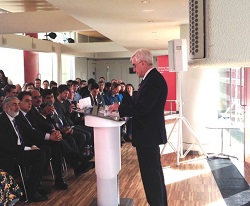 I gave a pre-budget intervention speech at the Southbank Centre outlining Labour’s plans for the future of Britain’s economy and demands on the Government ahead of the Budget. The speech highlighted issues that the Chancellor must address including the need to;

Video clip can be seen by clicking on the link here https://youtu.be/cuZ69WqRYJI

I attended the Dept. of Transport exhibition on the 3rd runway. The Government has failed to organise a meeting in the Heathrow Villages. I have written to the Secretary of State to protest and demand a meeting in the Villages.

Hands off our NHS national demonstration 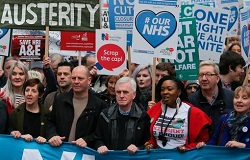 I joined hundreds of thousands of people protesting at the way in which the government has consistently underfunded our NHS. We set off from Tavistock Square at 1pm and marched to Parliament Square where I spoke to the huge crowd of NHS doctors, nurses and supporters opposing the cuts and privatisation of our NHS.

I spoke with Andrew about the fact that we are the only economy in Europe that is growing while wages are falling. There has been a squeeze on living standard.  To address this we need a real living wage of £10. We need to have a cap on energy costs and bring back rail into public ownership. We also need to address the gender pay gap. All this can come about if we have a fairer tax system and tackle tax evasion which is on an industrial scale in the UK and invest and grow our economy.

Philip Hammond has used his first Budget to claw £2 billion in tax on those self-employed who are on low and middle incomes. But he continued to boast about the £70 billion worth of tax giveaways to the rich and corporations by his predecessor.

Rather than provide the funding that would end a social care crisis in which 1 million vulnerable people go without adequate care, or calling an end to the state of emergency in our NHS, the Tories are doing next to nothing and don’t seem to recognise the scale of the crisis they have created.

This Budget does not address the problems created by seven years of Tory failure, and it has failed the fairness test for women who will be hit by a cuts in public services, and the national living wage.

I addressed some of the main policy announcements in the Budget, but I believe that overall the Chancellor’s statement evidenced a fundamental difference between the values of our two parties. What we saw in the Budget was Conservative Chancellor boasting about tax cuts to corporations and the rich while refusing to effectively tackle the crisis in social care for the elderly, refusing to properly fund the NHS, and increasing the national insurance burden on many middle and low-income self-employed earners, whilst at the same time breaking a clear manifesto promise.

Labour’s values are these: we believe in a fair taxation system, in which everybody, no matter how rich and powerful they may be, pays their way; and we believe that through a fair taxation system and collective endeavour, the elderly and the disabled should be cared for, the sick should be treated and children should be educated to develop their talents to the full. That was not what we saw in the Budget statement.

My full response can be read at 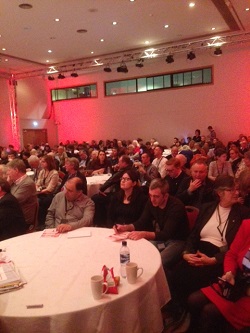 This was another hugely successful conference at The Royal Concert Hall in Glasgow. There was an extremely good atmosphere in the main hall and in the workshops. Speeches from Alex Rowley, Ann Pettifor and Jeremy were very well received. The workshops, which included, the Fourth Industrial Revolution, The transition to a Green Economy, Thriving Creative industries, Alternative Models of Ownership. All were well attended and participants had a good opportunity to contribute. There was positive feedback from both participants and speakers.

I spoke at this annual conference in Glasgow on the issues facing our economy on Brexit and the need for the protection of jobs and workers’ rights. 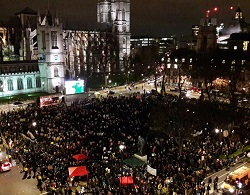 I spoke at the EU Citizens right to remain rally in Parliament Square as I believe it is a disgrace that last night the government again refused to guarantee the rights of EU citizens, who have made their lives here in the UK. We will continue to demand that the stress they, and British citizens living in the EU, are being put under is ended, and they are given the right to remain. Labour, at every stage, will challenge the government’s plans with our alternative of a Brexit that puts jobs, living standards and the economy first.

The meeting was a response to Philip Hammond’s Spring Statement (which is replacing the budget this spring, which has now been moved to the autumn) to highlight how the Tories’ economic policies are making people worse off. I spoke about Labour’s alternative to Tory austerity after the budget. What we want is a society that’s radically fairer, more equal, more democratic. An economy that’s prosperous, but built upon an economically and environmentally sustainable base where that prosperity is shared by all.
https://www.facebook.com/PeoplesChancellor/videos/1626423247398675/

In response to the Chancellor’s Urgent Statement in the Chamber I welcomed this reversal, but we now need an honest and forthright commitment that the self-employed agenda will be addressed. These people are the engine of our economy. They deserve to be respected, not attacked in the way they were seven days ago.

Threatening to raise tax on low and middle earning self-employed people while continuing handouts to the rich sums up this Government. In 2015, we had the tax credit shambles. In 2016, we had Personal Independence Payments reversal. Now in 2017 we have the U-turn on National Insurance Contributions.

I have convened 8 local community meetings to discuss the threat of the 3rd runway. This meeting brought together residents from Harmondsworth and Sipson.

The North East England Chamber of Commerce organised a round-table business engagement event to talk with Chi Onwurah and myself about the way in which the Labour Party, when in Government, will transform our economy and the implications that has for the North-East Region of England

I was invited by Mary Glindon MP to visit her constituency in North Tyneside CLP as part of my visit to Newcastle. We had a great evening at Innisfree Working Men’s Club, in Longbenton and I was delighted that I was able to have a pint of Guinness, with these active party members, on St Patrick’s Day. 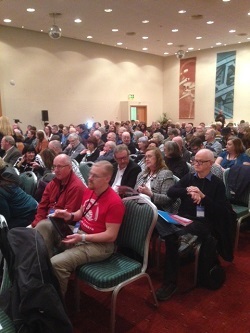 This was another successful conference at the International Centre for Life, Newcastle, which adopting the same format as the previous conferences in the series. The main speeches were very well received. The workshops, which included, the Fourth Industrial Revolution, The transition to a Green Economy, Thriving Creative industries, Alternative Models of Ownership, were well chaired enabling participants to contribute in a positive way. The presentations were informative and feedback from speakers was positive in that lots of good points were made, we had fantastic speakers with very strong messages and delegates were completely engaged.

I convened a further residents meeting on the 3rd runway. This time for the residents of Harlington.

I met with Groundwork Trust to secure the future of the floating classroom, a project I launched over 10 years ago.

I visited the local mosque to discuss the attack on Parliament and to thank the local Muslim community for its support and expressions of solidarity.

I joined with other members of our community in a vigil outside the Botwell Church in solidarity with all those affected by the terrorist attack in Westminster on Wednesday.

I attended the Canal Partnership to discuss further improvements to the local canal network and in particular the re-opening of Shackles Dock for community use. 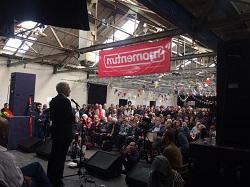 At momentum’s conference I spoke about The vision that Labour are advocating is a fairer tax system where the wealthy and corporations pay their way, an end to privatisation in the NHS, alternative forms of energy at the local level to tackle climate change and a million new homes including a new generation of council housing.

Momentum’s dedicated campaigning work is an asset for Labour that will help us to turn the party into a vibrant social movement once again so that we can rebuild and transform Britain so no-one and no community is left behind. 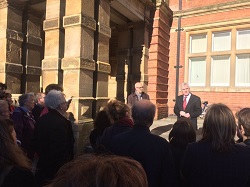 I met with students from Trinity School on Saturday who have been campaigning to keep their Sixth Form Open. Huge credit must go to the Head who has led a fantastic campaign against the closure – backed by some great campaigning from local Labour councillors. It just goes to show what can be achieved when a community pulls together and it is great news for local people that the Sixth Form will remain open.

I held a breakfast meeting with business representatives to discuss the implications of Brexit and future cooperation.

I spoke at the Self Employment Summit along with, Debbie Abrahams and Rebecca Long-Bailey about the growth of self-employment being one of the defining features of Britain’s post-2008 economic landscape. 4.8 million People are now self-employed – one-in-seven of the workforce – meaning that self-employment accounts for 66.5% of net employment since 2008.

Labour believe that these issues need to be addressed by taking into account the very different experiences of different types of self-employed people. That’s why senior Labour politicians are convening a self-employed summit to bring together a broad range of stakeholders to discuss these issues and more.