I wish you all a happy Christmas and peaceful New Year. Let me take this opportunity to thank you for your support and assistance during 2017. I am so grateful for the warmth of support provided to me by our local community. Rest assured I will continue to work hard in 2018 on behalf of my constituents and my community.

Games for the Many 2nd 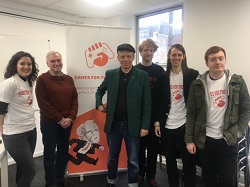 I was really impressed when I visited Outlandish, a digital agency that builds beautiful tools for positive social impact.  They work on technology that makes the world a fairer, better place: from web apps, data dashboards and monitoring tools that aid the discovery of new insights from complex data, to mass-impact campaigns and websites. Outlandish is a worker co-operative, owned by their members, and the profits generated are invested in prototyping and developing new projects for social change.  This event brought together Labour Party supporters under the title of Games for the many. The group is using and developing games technology to promote support for our policies. 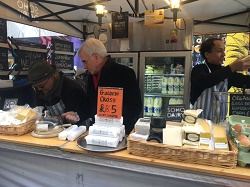 I visited a number of street traders in Berwick market in Soho as part of the Small Business Saturday and had a good chat with Robin Smith about the difficulties Small Business are facing. Robin is the Chair of Berwick Street Traders and who runs the Soho Dairy on the Market and SOHOST, the co-working space on Berwick Street.

I met with Mrs. Effie Achtsioglou, the Greek Minister of Labour, Social Security & Social Solidarity. We exchanged views on the future of the labour market and post-Brexit cooperation. Mrs. Effie Achtsioglou’s main concern was about the implementation of the new pension law last year, total state financing of pensions is projected at less than 9 per cent of GDP. She went on to question “how could the major problem confronting Greece be overgenerous pensions, when 43 per cent of pensioners receive less than €660 a month?”

I spoke at a lobby of construction members in support of their endeavours to ensure that pressure is maintained to stamp out the practice of blacklisting once and for all.  Unite’s key demands are that -There needs to be a full public inquiry into blacklisting, Blacklisting must become a criminal offence and The government must introduce public procurement rules which would bar companies found guilty of blacklisting of being barred from bidding from all public sector contracts.

I met with the JRF which has launched a report on UK Poverty 2017 which highlights that overall, 14 million people live in poverty in the UK – over one in five of the population. This is made up of eight million working-age adults, four million children and 1.9 million pensioners. 8 million live in families where at least one person is in work. The report, which has been produced in-house by the JRF Analysis Unit for the first time, examines how UK poverty has changed over the two decades, as well as more recent developments.

The analysis highlights that the three factors which have led to a fall in poverty and are now under question; state support for many of those on low incomes is falling in real terms, rents are increasing, and rising employment is no longer reducing poverty. As a result, JRF is calling for a national mission to transform the prospects of millions of people living in poverty in the UK.

I listened to some wonderful & enthusiastic singing from Year one and the school choir at Charville Primary School. Absolutely joyous Christmas show for parents. Thank you to dedicated staff team.

I chaired a meeting of the HPA management Committee to plan our activities including our Winterfest and the opening of the Welbeck Parade Community drop in centre. 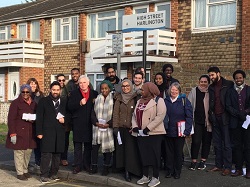 Thank you to our fantastic team of Labour campaigners out in zero temperatures in Harlington this weekend. Great response on doorstep. 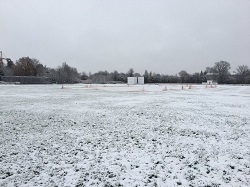 I attended Hayes Cricket Club AGM, where I have honour of being patron. Great community club involving lots of youngsters. However there was no cricket today!!!!

I spoke at the launch of an interim report by economist Graham Turner of GFC Economics called ‘Financing Investment’ at the Mermaid Theatre in the City of London. The report looks into the role of the UK’s finance sector, and how it could be used to provide more financing for technology and to deliver a better regional balance of investment. https://www.theguardian.com/commentisfree/2017/dec/13/challenge-john-mcdonell-move-capital-m1-labour-plan-bank-england-birmingham-westminster

I spoke at the launch of the Labour Muslim Network about the importance of the party’s relationship with the Muslim community. The event was designed to showcase the work of the LMN over the General Election 2017, and provide an opportunity to bring politicians, party members, staffers, and community activists together.

I attended an event in the House of Commons to commemorate the 6 month anniversary of the Grenfell Tower fire and remember the Seventy-one people who lost their lives on the 14th June 2017. John Bercow, Speaker of the House of Commons introduced the event which was attended by elected representatives of the bereaved families and former residents of Grenfell Tower. We watched a short documentary, ‘On the ground at Grenfell’, made by 9 young people: survivors, local residents and volunteers.

I tabled the following amendment to the finance Bill “That this House declines to give a Second Reading to the Finance Bill because it contains no measures to address the fact that the UK has the slowest economic growth in the G7 while the IFS warns of two decades of lost earnings growth, it fails to reverse the Government’s 2015 Bank Levy cut resulting in £4.7bn less in tax revenue from banks over five years and contains measures to further limit the scope of the Bank Levy resulting in a further fall in revenue, whilst at the same time crucial services that many children and families across the country desperately rely on are at risk due to seven years of budget cuts, it proposes a stamp duty cut that, according to the analysis of the OBR, will increase house prices, instead of helping to address the housing crisis through measures to build more affordable homes, it proposes policies without the benefit of an adequate Equalities Impact Assessment, it arises from a Budget which made no provision for lifting the public sector pay cap or addressing the funding crisis in social care and the NHS, it includes no measures properly to tackle tax avoidance and evasion and it is not based on an amendment of the law resolution, thus restricting the scope of amendments and reducing the House’s ability to properly scrutinise and improve the Bill.” https://labourlist.org/2017/12/john-mcdonnell-tories-tax-giveaway-for-bankers-means-austerity-for-our-children/

I convened a meeting of local residents, community groups, schools and police to discuss how we can tackle some of the anti-social behaviour issues in Hayes town. 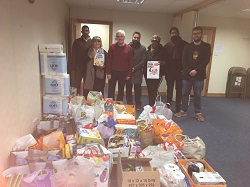 Thank you to the large number of generous people who came to our coffee morning and to all those who donated to our food bank for Christmas.

I attended Hillingdon Play Association’s WinterFest, which was an overwhelming success bringing smiles to the faces of so many local children.

In addition to visiting several local schools over the last 2 months, I have visited a number of local sites where residents have reported environmental problems and anti-social behaviour issues. For example I visited the site of the Dower House in Harlington where there has still been no action by the owner to restore this listed building. On each of these site issues I am pressing for action from the Council and other agencies.