I wish you all a happy and Campaigning New Year. Last year was a whirlwind year for our country. Theresa May and the entire political establishment judged the Tories would be wiped out in an unnecessary election but labour supporters said we are not going to let that happen and they mobilised a massive and wonderfully creative campaign. We published a Labour manifesto that lifted people’s hearts. We showed the sort of fair and prosperous and modern society that we aim to create. This government is so unstable it is impossible to predict when the next general election will come. The conservatives are doing more and more harm to our economy and public services especially to our NHS and our schools. So in this New Year let us all commit ourselves to work even harder to campaign to secure a labour government that works for the many not the few.

PFI Discussion in the Commons 16th

I asked the The Chief Secretary to the Treasury Elizabeth Truss about the Thousands of Carillion workers will turn up to work tomorrow unsure of whether they have a job, and they may not appreciate Conservative boasts about employment today. The workers face cuts to their pensions, and hundreds of small firms along the supply chain are also uncertain about their futures. The traditional role of the Treasury is to protect our public finances, so will the Minister explain to the House what involvement the Treasury had in the billions of pounds of contracts held by Carillion at the time of its liquidation? We know that Treasury approval is required for PFI contracts, so will she tell the House how many PFI and PF2 contracts were signed by the Treasury during the current Chancellor’s time in office? What will happen to those projects and to the staff working on them? When there were loud and clear worrying signs about Carillion, why did Treasury Ministers, instead of intervening, collude in the strategy of drip-feeding more contracts to Carillion to buoy up an obviously failing company?

I attended a summit with representatives of small businesses and unions to discuss the future of self-employment.

I visited Liverpool City Region along with Rebecca Long bailey, Shadow Business Secretary and Jeremy Corbyn to discuss work being done on the green economy and the plans for a Mersey Tidal project. We also visited Ørsted’s wind turbine manufacturing centre. We had a tour of the facility and a presentation from the management team. It was a great opportunity to highlight Labour’s plans for a regional investment bank and how it could support large scale regional infrastructure projects, like the Mersey tidal project.

I spoke at SERTUC conference on the development of our economic policies and trade union rights. 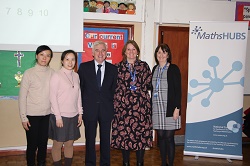 I visited Botwell School to observe a maths teaching session. Botwell has been part of the Shanghai Maths project and are a ‘hub’ school who uses this method of teaching maths and leads training etc for other schools.

The Maths Lead visited China in the autumn term and was placed in a school to observe the maths teaching style there and to teach the Chinese children too. In return Botwell School hosted two teachers from China.

Pauline Glancy, headteacher told me that “as a school, we have a lot to discuss to develop our maths Mastery approach and move it further forward. I think the Shanghai exchange has shown us that the Chinese approach to teaching Maths is very successful! “ 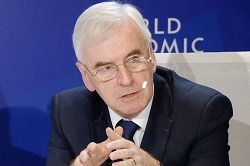 I attended the World Economic Forum, 2018 Conference Theme: Creating a Shared Future in a Fractured World in Davos.  Talks ranged from special addresses from world leaders to panel discussions on the future of education, impact of climate change, gender equality.

My main message was a warning to global elite: “growth for a few risks a political and social avalanche unless there is fundamental change to our rigged economic system”.

I spoke at a number of public engagements including an Informal Gathering of World leaders: Creating a Common Vision for the European Union, European Regional Business Council: Onwards with Europe and Will Free Markets make a comeback?

John McDonnell: I’m in Davos to tell the elite they are held in contempt

I send my deepest sympathy to the family and friends of the three youngsters tragically killed in the car crash at the bus stop near the Esso petrol station on Shepiston Road. I wish to express my thanks to the Police, paramedics and emergency service staff who responded to this terrible accident. I have liaised closely with the Police on developments in this case.

I was pleased to join local pensioners for the parish New Year’s celebration.

I spoke at Lewisham’s labour policy day about building a radical manifesto for the local elections in May. 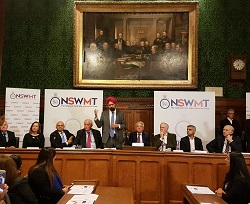 The British and the Sikhs have a special relationship and a War memorial in London dedicated to the Sikh Soldiers who fought during the two World Wars, the first in any capital city outside India, would further cement that bond for generations to come.

I attended the launch of the ‘Nurture Portrait 2016-17: a snapshot of the SEBD experienced by children in the UK’ in the House of Commons. The report, uses data from the Boxall Profile, the most commonly used tool used by teachers in England to understand the social, emotional and behavioural needs of their pupils, provides valuable insight for all those working to improve the mental health and wellbeing of children and young people in the UK.