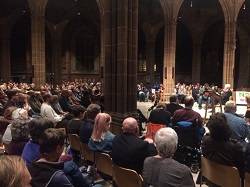 I spoke at The People’s Assembly Against Austerity and told supporters that after having spoken to investment fund managers and pension fund managers it was clear financial institutions were turning to Labour.

In some ways, it’s a bizarre situation, they are coming to us for reassurance against a government that is falling apart. So Jeremy Corbyn and I are the stabilisers of capitalism – it’s bizarre isn’t it?” We all want An Economy that Works for All

I was proud to present Accounting professor Prem Sikka with a special editor’s award from The Accountant and International Accounting Bulletin at a one-day conference and awards dinner at the Tower Hotel London.

In 2003, Prem Sikka helped the launch of the Tax Justice Network and is now one of its senior advisers (unpaid). He has advised and given evidence to the EU and UK parliamentary committees. Most recently, he was an adviser to the UK House of Commons Work and Pensions Committee for its investigation into BHS and related pension matters. His research on accountancy, auditing, corporate governance, money laundering, insolvency and business affairs has been published in books, international journals, newspapers and magazines. Prem also headed up the team that reviewed the HMRC for the Treasury.

I had the privilege f opening with the mayor Belmore’s breakfast club, which is providing free breakfasts supported by Greggs.

I spoke at the Morning Star Conference in Glasgow about the challenge of whether it is possible to pioneer a democratically-con­trolled economy drawing collective political strength from the nations of Britain separately or collectively within a federation.

I attended the management Committee of the HPA to plan our activities over the coming year. Thanks to the hard work and commitment of our volunteers we will be organising again our Christmas festival and next year opening a drop in play sessions at our Wellbeck Parade centre.

In Parliament I am pleased to report that we won a debate to halt the Government’s cuts to supported housing and the Government has now halted this policy.

I spoke to a meeting of members of Poplar’s CLP, Jim Fitzpatrick’s constituency, to thank them for their hard work in the election campaign. 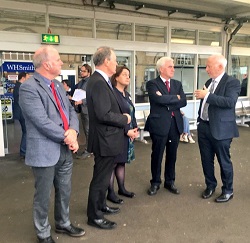 As part of my programme to demonstrate how labour will transform our transport infrastructure I visited the local train station with Andy McDonald which has been in need of major repair work for some time. Network Rail, after lobbying by Labour Mayor of Middlesbrough and Andy, have provided £2.7m to improve access, re-open the main entrance and re-open the car park. Andy has been closely involved with bringing in even more investment which is badly needed to improve the station prior to the direct Middlesbrough link to London which is due to start running in 2020. 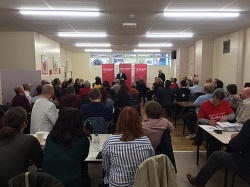 Later in the day I attended a fundraising dinner with Members from Middlesbrough South and East Cleveden along with local MP Stephen Hepburn. Over 250 party members attended and the evening raised thousands for local campaigns.

I spoke to a great group of local students who interrogated me on the role of an MP and the issues we face in our area.

The International Day for the Eradication of Poverty 17

I met with some constituents who came down to the House of Common to celebrate The International Day for the Eradication of Poverty. The theme for this year’s commemoration reminds us of the importance of the values of dignity, solidarity and voice underscored in the Call to Action to fight to end poverty everywhere.

I attended Terry Dunleavy’s funeral. Terry served as a Labour councillor and engaged in numerous trade union and community campaigns locally and nationally. I was proud to meet his family to convey our condolences.

I attended the rally in Parliament square to demand an end to the unfair real terms pay cuts for public service workers. The TUC joined with our unions and thousands of supporters to tell the government that we have had enough. Public sector workers deserve fair pay, and the country can’t afford not to give it to them.

I spoke at NOR4NOR (Norfolk for Nationalisation of Rail) public rally in Norfolk along with Mick Cash, General Secretary RMT, Linda Laurie, Momentum Disabled Caucus and Lesley Grahame, Norwich Green party. We discussed the increasing need for rail public ownership; the issue of rail safety & security in the light of Driver only operation (DOO) dispute and the wider issues thrown up by the Grenfell fire in London. 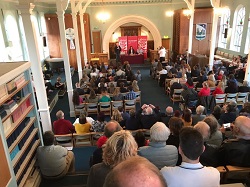 With Jeremy Corbyn I addressed rallies of party members in both Gt Yarmouth and Norwich. Packed meetings of 600 people enthusiastically debating on policies. 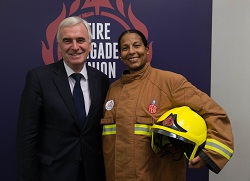 I met firefighters in Westminster last night (24 October 2017) to recognise and celebrate the invaluable work firefighters do keeping our communities safe.  It was an honour to have the opportunity to meet some of the professional firefighters who do such invaluable, challenging work.

The Firefighters who responded to the Grenfell Tower fire had their training and professionalism tested to the limit. All members of parliament should support our fire and rescue services, in the interests of both public and firefighter safety.

I joined several MPs to support a cross party demonstration to highlight the number of additional flights over London if Heathrow expansion goes ahead. We also joined SHE campaigners in media talks to explore the new figures demonstrating Heathrow expansion is no longer the most cost effective solution in comparison with Gatwick.

I spoke to Unite members from BAE systems whose jobs are at risk from defence expenditure cuts.

I met with shopkeepers and residents at Belmore Parade who are concerned at the threat to the shopping parade as a result of the loss of parking, stemming from the Council’s supposed environmental improvement scheme.

I visited the Gledwood Roads to inspect the appalling level of illegal refuse and litter dumping. Local residents have had enough of the Council’s inaction. I am pressing the Council on this issue.

This month the Government introduced its Finance Bill. My Treasury Team of Shadow Ministers pressed amendments to tackle tax avoidance in trusts and the abuse of the Tax System by non domiciles. The Government resisted these amendments but we will be continuing to campaign to address the abuse of our tax system.