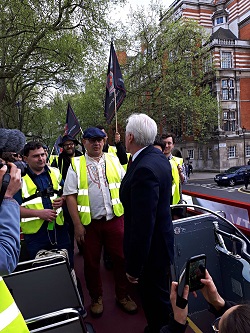 The union campaigning to organise and represent some of the poorest paid and insecure workers in our city, organised a tour of employers with whom they are having disputes over pay and conditions. I was pleased to join them and speak in their support.

I joined local party members in Heathrow villages and West Drayton to campaign in the local elections. I was pleased that nationally Labour improved on its overall percentage of the vote since the general election, which lays the foundations for the next general election whenever it comes. I was pleased we held all the seats in the Heathrow villages and took a seat from the Tories in west Drayton. I want to thank all the local Labour candidates and party members who worked so hard in this campaign. 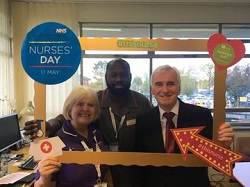 I just visited Hillingdon Hospital to promote Nurses’ Day coming up on 11th May. I can’t thank them enough for what they do and for their dedication and professionalism. In addition I met with the Chief executive and Chair of the Trust to discuss the future redevelopment of the hospital that is so much needed.

I attended the West Drayton May Day Fair. It’s their 5th annual event. There was lots of entertainment with the petting farm, bouncy castle, punch and Judy, parades, face painting, BBQ etc. A great local family day out.

I spoke in the plenary session at the International Conference celebrating Marx’s work and exploring the significance of Marxism in the world today. Organised by the Marx Memorial Library on the bicentenary of Marx’s birth at the School of Oriental and African Studies, London

I met with local members, councillors and parliamentary candidate for Pendle Azhar Ali to thank them for their hard work during the local elections to support the beginning of the campaign to win this seat for labour. 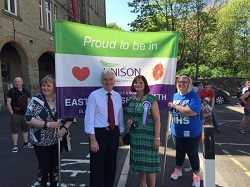 I joined Julie Cooper MP and thousands of people in Towneley for the annual May Day parade from the town hall to the park where festivities continued with a funfair and  various charity and trade union stalls around the field and in the marquee. I spoke about Labour’s plan for government, including investing more money in services such as the NHS. We will have the most radical form of government since Prime Minister Clement Attlee took power in 1945.

I attended an event at Speaker’s House, which gave Grenfell United supporters the chance to share their experiences with MPs. The speaker, Mr Bercow told Grenfell United – the main group representing bereaved and survivors of Grenfell – that what happened to them was “a scandal”. He said “You mustn’t let the spotlight shift, you mustn’t allow the questions to go unanswered. You mustn’t facilitate any abdication of responsibility at any level for trying to arrive at the truth and secure justice. Photo by Marley Edwards 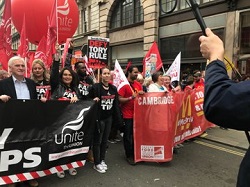 I joined tens of thousands of Steelworkers, teachers, midwives, carers, retail staff, posties, civil servants, firefighters marching in London, demanding a new deal for working people. The only way we can achieve the change we need to see, is if workers stand together with their union.

The trade union movement.is the greatest force for social justice in history. And now is the time to write a new chapter in our collective story. Together – we can build a growing economy for the many not the few. Together – we can nurture a society free from sexism, racism and discrimination. And together – we can win the New Deal working people are crying out for. I was proud to march alongside the McDonalds strikers and TGI Friday workers campaign for fair pay.

Grenfell Rally outside Parliament followed by Silent March around The Tower.14th

Following the debate is in Westminster Hall it was a moving privilege to join the Grenfell Silent Walk.

I attended the launch of the progressive economy Forum in Parliament. The forum brings together a Council of twelve eminent economists and academics with a dedicated secretariat. They aim to develop and advocate progressive policy ideas for the UK and to inform the wider public of the possibilities offered by an alternative macroeconomics.

As a committed campaigner for the Tamil people for many years I was pleased to join the Tamils for Labour commemorating the ninth anniversary of the end of Sri Lanka’s armed conflict which took place on 18 May 2009. The event provided an opportunity to remember all those that died during the country’s civil war and to reaffirm the belief that only with a true reckoning with its past will Sri Lanka be set on the path to lasting peace.

I attended the meeting of the Canal Partnership to discuss the improvement to the Canal facilities in Hayes and West Drayton. At long last my proposal for residential moorings is progressing.

I met with Cllrs Janet Sweeting and Janet Duncan and residents to discuss the problems facing residents on the Porter’s Way estate and agree a way forward.

State of the Economy Conference 19th 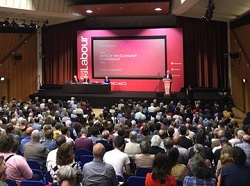 I hosted the second of our annual State of the Economy Conferences at the Imperial College. The conference heard from experts about the current state of the UK economy and also gave the opportunity for everyone to pitch in with their own ideas. Labour’s Shadow Treasury team and an excellent range of speakers discussed topics such as Labour’s industrial strategy, tax and public spending, public ownership of our utilities and Labour’s policies for productive finance and investment. 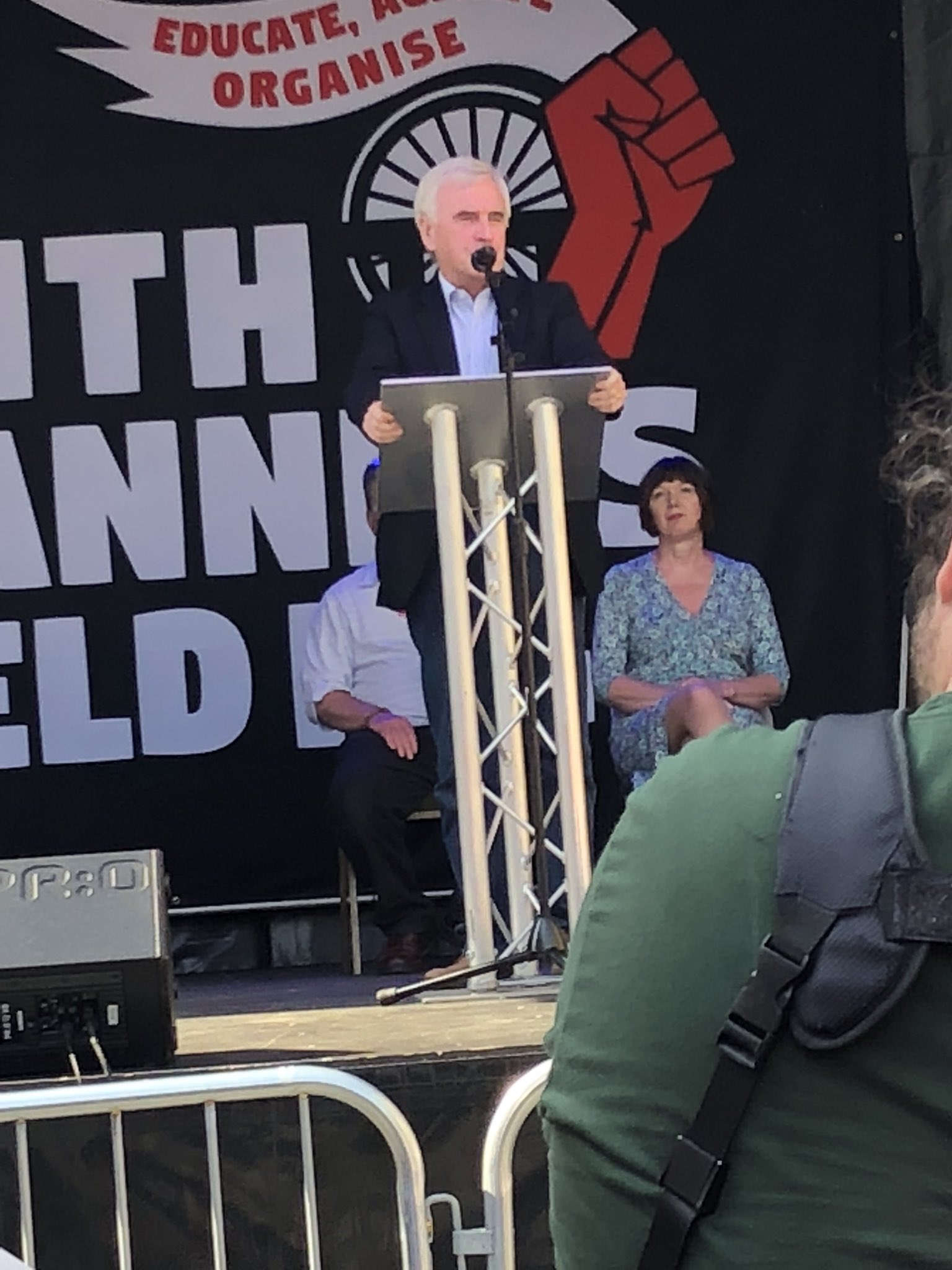 I delivered a keynote address, along with Jon Trickett and Frances O’Grady, for the With Banners Held High (WBHH) festival, and to receive a public petition to the government for the introduction of a £10 an hour minimum wage, and an immediate end to zero hours contracts.

WBHH was originally organised to mark the 30th anniversary of the Miners’ Strike 1984/85. But this year they used the opportunity to attract and inspire our younger generations currently in struggle against austerity, inequality, weakened working rights, and lack of opportunity.

At today’s treasury questions I called on the Chancellor to change the law so that any political party found to have accepted donations from corrupt sources to return that money. I got a feeble response from a government soft money launderers and tax evaders. https://twitter.com/johnmcdonnellMP/status/998960920402518021

In delivering the keynote speech at PCS conference I told participants that Labour is preparing for power and translating the party’s 2017 general election manifesto into policy and plans for legislation. The trade union movement is coming into government with us. No longer will we tolerate what happened in the recent past, when some in the Labour Party saw the trade union movement as some form of embarrassing relative. It is the trade unions who founded the Labour Party and it is the trade unions who will support us when we implement that manifesto. We shall stop tax evasion on a national scale, so that we can save the NHS, build a national education service and scrap the tuition fees that are burdening our children.

I visited the Hospice to support the fundraising campaign being launched by the hospice to fund a new bedded unit. I am proud to be a trustee of the hospice which provides such an excellent service.